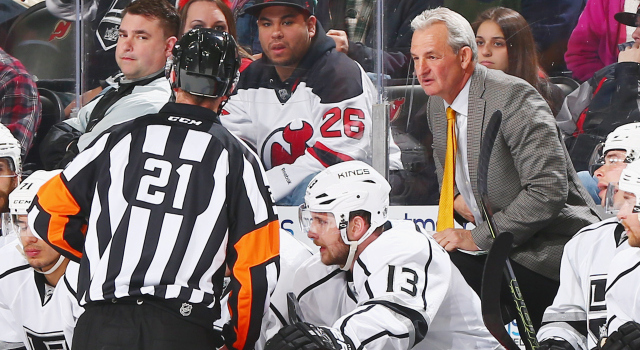 On whether the Kings dealt with “bad luck”:
There’s no luck in this game. Games are close. If you’re just relying on luck, then you’re in the wrong league.

On the team’s performance:
We played really well. Best game of the trip. Just we’re playing against a team that’s got the best goals-against in the league, and when you’re playing three games in three and a half days, you need to get a little bit more out of guys who don’t play very much normally. The difference in the game.

On moving lines around and trying different things:
Not really. After Gaborik got hurt, we’ve got one left winger who’s been scoring and five that haven’t. … Move ‘em around a little bit, try and get somebody going. If not, then we’ve probably got to look at somebody in Ontario.

On whether he expected a defensive game:
Not really a defensive game. I mean, both teams check really well, and that’s what it was. It wasn’t really defensive. Defense is when you stand in front of your goalie and play in your own zone the whole time. That’s not the case.

On what the Devils did well to frustrate the Kings:
They scored one and we didn’t score any.