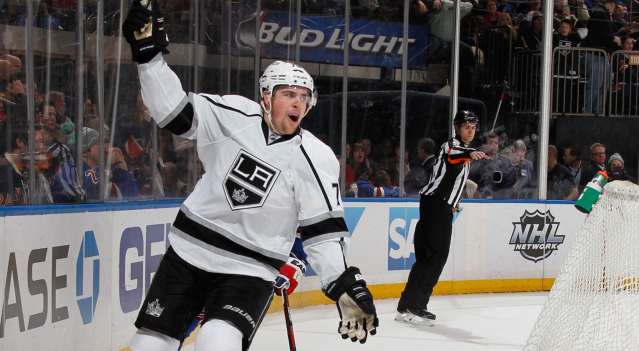 The Los Angeles Kings won a 5-4, see-saw overtime battle over the New York Rangers, but were in a pretty good position to win this game throughout, even if the win probability chart resembled a typical seismograph reading somewhere around Parkfield. Though they scored one power play goal and one six-on-five goal, their even strength play was quite good against a team that entered the night with the second-best five-on-five goal differential in the National Hockey League. In five-on-five play, Los Angeles’ 59-35 shot attempt advantage was an indication that, other than some shaky moments in the second period, they had a strong night in attack and in offensive zone time. That came to a head in the third period when the Kings out-shot the Rangers 11-4 but allowed a power play goal – New York’s third in 51 opportunities – that went against the tilt of the ice prior to the man advantage. From a superficial level, Los Angeles continues to score, get scored upon, score power play goals, and yield goals when killing, a strange and unkingly spike in offense that will most likely be looked back at as an in-season blip when 82 games have been played. There are some challenges with personnel, which made last night’s road win against a very good Eastern Conference team all the sweeter for a team looking to rebound from a 5-2 loss the night prior.

Some of the good and bad: Brayden McNabb struggled with New York’s speed on several goals, and while the overall arc in his play has been climbing this season, he’s been in a little bit of a valley in his trajectory during this period of raised offense. On the other hand, Dustin Brown has been quite good, and should the team be without Marian Gaborik for any considerable amount of time, would benefit the team by continuing this streak of production. Along with Jeff Carter’s late third period faceoff win, he had one of the best secondary assists of the night when he got in front of an attempted Rangers zone exit by getting what appeared to be his skate on a puck – New York had numbers going towards Los Angeles end – and created a turnover that directly led to the Lucic-Kopitar tap in when there very well could have been a four-on-two in the other direction. That was a momentous goal that stemmed the second period tide, which had favored the Rangers to that point. Also, as was quite clear, Anze Kopitar was spectacular on all sides of the puck, and any remnants of the team’s poor start in Brooklyn the night prior were wiped out with his snipe 33 seconds into the game. He scored three big goals in the win. 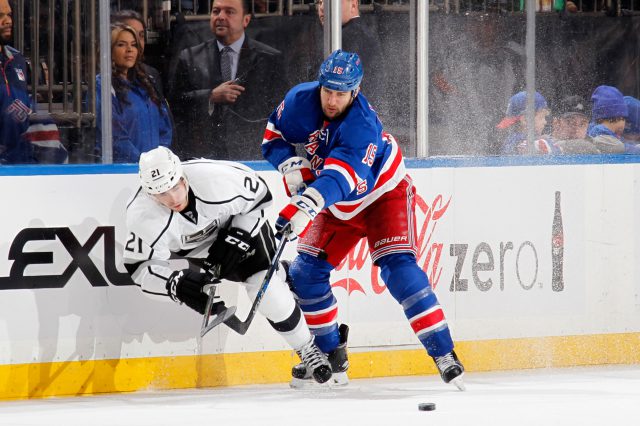 Tanner Pearson, capable of beating a goalie cleanly with a hard, accurate release off the rush, won the game in overtime with his only shot on net and after sitting out a pair of games provided an instant narrative in a game that had quite a few of them. Peter Budaj’s return to the NHL after a hiatus that took him to both the Newfoundland and Pacific Time Zones resulted in his first NHL win since April 4, 2014, when he was a member of the Montreal Canadiens. He gave the team a chance to win with several huge saves off late chances from Derek Stepan and Derick Brassard. Jeff Carter, also deserving of one of the game’s three stars, has some goals coming to him. He’s been quite good on the road trip and after cashing in on a greasy one against Boston on Tuesday could start to see the opening of the floodgates.