Waking up with the Kings: February 12 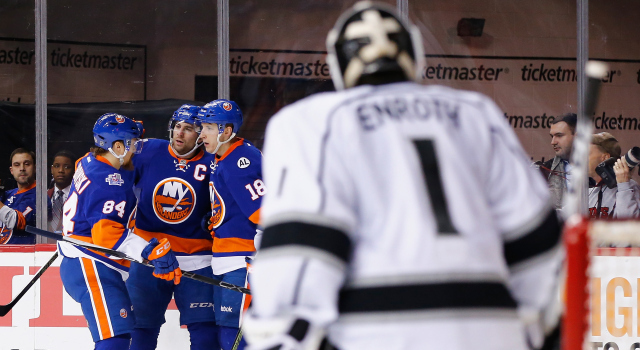 It was not a blueprint for victory: The Kings dug themselves a 3-0 first period hole and lost the goaltending and special teams battles in a 5-2 loss to the New York Islanders Thursday night at Barclays Center. As much as their offense and power play has been electric as of late, a 3-2 league has evolved into a 4-3 league as Los Angeles has now gone 13 games without giving up zero or one goals in any outing. There are quite a few twos in that stretch of goals-against, but there are also two fours and two fives as the team has now averaged 3.33 goals per game while yielding 3.00 over the last 12, a goals-against rate accentuated by having ceded at least four power plays (and at least one power play goal) in six of the last eight games. They faced a more desperate Islanders team, sandwiched between the New York Rangers and the Pittsburgh Penguins and in front of a glut of teams just outside of a playoff berth in the Metropolitan Division and Eastern Conference, and, as Darryl Sutter said, were “flat” early on, which came as a stark contrast to a premier 60-minute effort two nights prior in a 9-2 win over the Boston Bruins.

The Islanders blocked 24 shots and channeled a lot of Kings pucks away from Thomas Greiss, who was solid. The most impressive of the blocked shots came on a sliding Johnny Boychuk denial midway through the second period from the left side of the ice – I can’t recall who the shooter was; we mentioned him on radio, though I don’t take many notes in the heat of action – in front of a mostly open net. Los Angeles didn’t generate as much offensive zone time until late in the second period and throughout the third, but did build up some rushes as the game progressed, including a poised Milan Lucic tap in off a Jeff Carter feed in which the net-bound winger either propelled or redirected the puck towards the net with his skate before finding the wherewithal during a fast play to get his stick on it a mere inch or two in front of the goal line.

A look at the game sheet doesn’t provide a ton of clues, but from the extremely low perch of the Barclays Center broadcast location, where admittedly, everything seems faster than it does upstairs, Kevin Gravel was decent in a very early eye test. I wasn’t focused solely on him, and there was perhaps one rough exchange in the third period along the corner boards in the far end of the ice, but he calmed several plays down in his defensive zone and led a few breakouts with hard, up-ice, tape-to-tape passes. He’ll be shielded, of course, should he continue to earn ice time on this trip, but with the adrenaline running for a first game, his pace of play was fine. Sutter was asked about his debut and responded that “he played the left side, and they generated a lot from that side of the ice against us,” so it’s not particularly easy to single out his impact amidst what was otherwise a forgettable night. The team has a strong constitution that allows it to rebound well after losses, which should make for an interesting 2014 Stanley Cup Final rematch against a New York Rangers squad that has won four in a row.