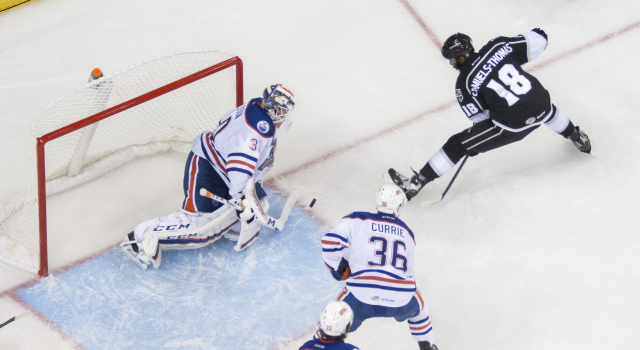 Reign game breakdown
The Reign (28-12-3-1) gave up goals just 20 seconds apart spanning the second and third periods and lost for the second straight game in a 3-2 defeat to the Bakersfield Condors (22-18-2-2) on Friday night in Ontario. The Reign had 20 shots on goal in the first period, which finished tied 1-1 after goals by Anton Slepyshev and Justin Auger, his 11th. After a fairly even second period the Reign were caught sleeping, giving up a goal with just one second remaining by Jujhar Khaira, who beat Michael Houser blocker side from the slot. Then, an unfortunate bounce 19 seconds into the third put the Reign down 3-1 when the puck hit off Michael Mersch’s stick on a backcheck of a 2-on-1 and past Houser, who was starting his second straight game in place of Peter Budaj who’s an emergency call-up with the Kings. The game took a physical turn late in the third period as the sides shared a total 12 minor penalties (nine for roughing) in the final five minutes. Nic Dowd scored his 10th goal of the season off a deflection of a Christian Ehrhoff shot with 1:02 remaining but the Reign came up short as Condors goalie Anders Nilsson finished with 37 saves. Ehrhoff skated in his first game with the team after clearing waivers earlier this week and was paired with Derek Forbort, who had been playing with Kevin Gravel before he was brought up to the Kings. Rookie forward Valentin Zykov was back in the lineup after being a healthy scratch the previous three games. Houser finished with 14 saves.

Best quote
Michael Mersch, on roommate Kevin Gravel’s call-up to the Kings: “I was pumped. Me and him were sitting having breakfast in, where were we, San Jose and we were having a coffee and some oatmeal from Starbucks trying to save a few bucks, a few dollars of per diem. Now he’s going up and making the big money so that’s funny.”

Three stars
–Anders Nilsson – All 6-foot-5 of the goalie who was just sent down by the Oilers stood out the entire night, particularly in the first where the Reign fired 20 shots on net. Nilsson finished with 37 saves, but none better than his quick glove on a Sean Backman shot on a first period power play try from the right circle. That play actually had to be reviewed to see if his glove crossed the goal line. Nilsson, who was sent down in favor of AHL All-Star Laurent Brossoit, appeared injured midway through the third after some chaos in his crease but remained in the game.
–Jujhar Khaira – Khaira’s goal with one tick left in the second period beat Houser clean as he took full advantage of a puck-watching Reign defense on a play that Ehrhoff, who was on the ice, said after the game he thought was offside. Khaira, a third round pick by the Oilers in 2012, also assisted on the goal that went off Mersch’s stick.
–Nic Dowd — The center was on a tear in mid-January but was held scoreless in his last seven games before his goal tonight, which sent him into the double-digits plateau at 10. He joins Auger, whose high shot from the right circle with 5:20 to go in the first period beat Nilsson, Sean Backman, and Mersch in that category.

Turning point
Caught in a tough position, Mersch laid out his stick on a backcheck of a 2-on-1 and instead of breaking up the Rob Klinkhammer’s pass the puck deflected off his stick and into the gaping Reign net. It was an unfortunate bounce and in a game against a hot goaltender, one they could not overcome.

Stat fact
–20 – Seconds between goals spanning the second and third periods for Bakersfield. Khaira’s wrister with one second left in the second and Klinkhammer’s credit just 19 seconds into the third were both the latest and earliest respectively that the Reign have given up goals in a single period this season.

This and that off-ice
Toronto Maple Leafs assistant GM Kyle Dubas was signed in to watch the game. … Budaj picked up the win in his first start with the Kings, 5-4 in overtime over the Rangers. Find out what he had to say after the game here, via LA Kings Insider Jon Rosen.

Next up
The Reign will fly to Stockton bright and early Saturday morning for a 7:30 p.m. meeting with the Heat. Ontario lost the last meeting 2-1 in overtime on Jan. 27 in Stockton but was 4-1 in the previous five matchups against the Flames affiliate.