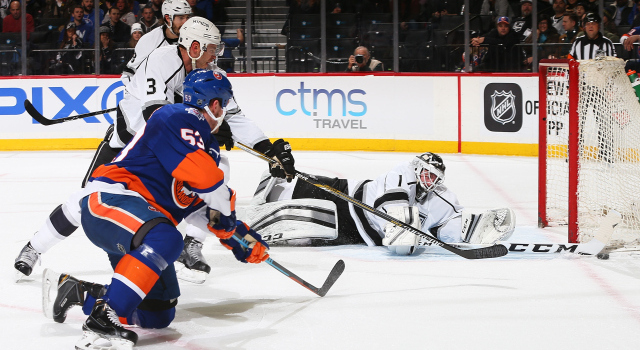 On chasing the game:
Yeah, we were flat. We didn’t play much of our game at all.

On the Kings’ efforts in the second and third periods:
Yeah, it’s still not very good, they’re a high-scoring team. If you think other than down the middle of the ice, they’ve got those three centermen. They’ve got a lot of goals for them. I thought Jeff played really well, but our other centermen had a hard time.

On the “challenges” of the first period:
Well they got the lead, so that’s the challenge.

On whether it’s easy to “toss this one out” before another “tough” game tomorrow:
Every game’s a tough game.

On what he’s expecting out of the road trip:
We’ve had a good season, and we’ll have a good trip.

On Kevin Gravel’s performance:
It’s hard to evaluate, you know he played the left side, and they generated a lot from that side of the ice against us, so it’s hard to single that player out there. Good for him, he gets his first NHL game.

On whether Peter Budaj will start in net Friday:
Well, if you’re there at Madison Square Gardens you’ll find out.