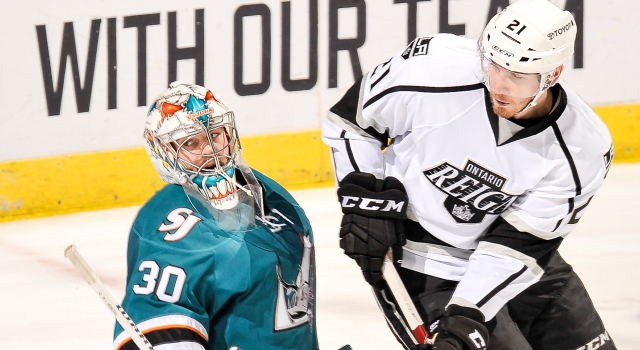 Reign game breakdown
Barracuda coach Roy Sommer broke the AHL wins record for a head coach with win No. 637 as the Reign fell 4-2 in San Jose after a hectic few hours leading up to the puck drop. The Reign (28-11-3-1) learned early in the day that defenseman Kevin Gravel would be called up to the Kings and not be available after Christian Ehrhoff was placed on waivers. Then, closer to game time it was made known that goalie Peter Budaj would also be out as LA Kings Insider Jon Rosen reported he would be called up to the parent club as well after an injury to Jonathan Quick. Insert Michael Houser in net, who had last played on Jan. 17 in a 2-1 win over Texas. San Jose (20-6-5-3) took full advantage, scoring three goals in the first period, one just 1:35 in by Bryan Lerg. A wrist shot by Gus Young beat Houser clean just before the 6 minute mark and the Reign were left chasing the rest of the way. Despite Jonny Brodzinski’s rebound tally, his second goal in as many games, the Reign headed into the locker room down 3-1 after yet another power play goal by Barclay Goodrow with 5:34 left in the first. A shorthanded breakaway goal by Ben Smith early in the second gave San Jose a 4-1 lead and the Reign made goalie Aaron Dell work, but could not put one of 21 shots in the period by him. Justin Auger’s 10th goal of the season off a rebound just 1:49 into the third made things interesting, but San Jose and Dell kept the Reign scoreless the rest of the way. Houser stopped 22 of 26 shots in the loss that snapped the Reign’s 4-game winning streak.

Three stars
–Roy Sommer – The San Jose coach had four previous shots to either tie or break the AHL wins record for a head coach against the Reign and came up empty in each attempt until Wednesday’s win set him over the top. Sommer, in his 18th season in the league, all with while coaching the Sharks’ affiliate, reached win No. 637 and now stands alone ahead of Fred “Bun” Cook.
–San Jose special teams – Special teams win hockey games and an outstanding effort by San Jose was the difference in this one. The Barracuda went 2-for-3 on the man advantage, taking a stranglehold of the game on two power play goals in the first period. Again, early in the second, they used a shorthanded goal by Smith to gain a 4-1 edge. Overall the Reign went 0-for-4 on the man advantage and are now 0-for-7 in their last two games against San Jose.
–Aaron Dell – Not only did the San Jose netminder pick up the win with a season-high 50 saves, he stopped all 21 he faced in the middle frame where Ontario did all it could to get back into the game. He came out and saw pucks all night, the two goals he gave up being off rebounds to Brodzinski and Auger.

Turning point
Smith’s breakaway dagger came shorthanded just 1:22 into the second period and gave the Barracuda a commanding 4-1 lead. Smith took the puck at the Reign blue line from defenseman Zach Leslie, playing in his first game of February, and went in on a breakaway to beat Houser five hole for his third of the season.

This and that off-ice
Prior to the game the Reign signed goalie Derek Classen to an amateur tryout contract. The move was made to ultimately give the Reign a backup option to Houser as LA Kings Insider Jon Rosen reported that Budaj will be recalled on Thursday after news broke Wednesday that Quick is day-to-day.

Next up
The Reign will not practice on Thursday and are back in game action on Friday as they host the Bakersfield Condors at 7 p.m.