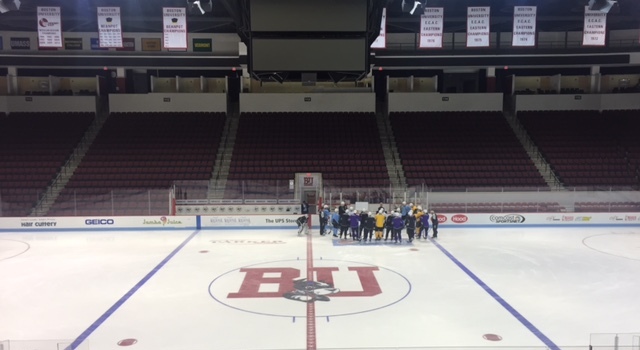 -The Kings took the ice at Agganis Arena at Boston University at noon on Wednesday and were without Jonathan Quick, who was deemed to be “day-to-day” by two members of the team’s hockey operations. As has also been noted, Christian Ehrhoff was placed on waivers.

Darryl Sutter also provided an update on Quick that indicated that there isn’t any grave concern on the goaltender’s status, saying, “he had a day off.”

“Go east, gets a day off. We’ve done it several times already. We’ll just go day by day. If you wouldn’t have been here today, then he would’ve practiced,” Sutter said.

-In regards to Kevin Gravel’s impending call-up, the sense I received on the team’s decision to call him up over Derek Forbort, who has already played 14 games with the club this year, is because the Kings are in the process of identifying which players in the system would be capable of stepping in defensively if called upon, and the team had already had a look at Forbort earlier this year. Sutter addresses this in the quote transcript below.

Via Ontario Reign Insider Lindsay Czarnecki, Mike Stothers said in January that Gravel “steps it up when you need him. That’s a sign of good character. … I see a lot of leadership in Gravs. He could be a captain someday.”

Gravel has been playing alongside Forbort in Ontario and has seen first unit power play time, though that’s not a role he’s expected to step into at the NHL level. He’s one of five players to have played in all 42 games this season, and two of his goals have been overtime game-winners. He’s a solid, well-balanced defenseman who has a lot of poise in his game and has admirably worked out some deficiencies in his time under the Kings’ tutelage. The Kings will now be able to find out whether the very good AHL defenseman is capable of playing at an NHL pace.

Also, should Nic Dowd ever get into an NHL game – at this point, given what he’s shown, there’s a high probability of that – then eight players out of 10 (!) from the 2009 class will have played at least one game in the NHL.

-It was a full team practice minus Quick, and the forwards aligned as such:

-We’re en route from Boston to New York, and once we land and arrive at the team hotel, I’ll post some sentiments of Gravel’s play by Mike O’Connell, as well as some practice quotes from Anze Kopitar and Jhonas Enroth. There’s a lot more to come.

Darryl Sutter, on Tuesday night’s performance:
Scored enough goals to win. Our goals against was better than it’s been in prior games – games we’ve won, games we’ve lost.

Sutter, on Andy Andreoff and Kyle Clifford’s performances:
Well, we wanted to get Cliffy in back-to-back games, which we did, and we wanted to get Andreoff back in at some point, and we did, and we wanted to get Nolan in at some point. [Reporter: How’d you evaluate all those guys based on that?] We won the game. I’m not getting into individual stuff. Trying to win games. Not getting into anything else. They have to play a specific, significant role on our team, and if they can’t do it on a consistent basis, then somebody else gets to do it.

Sutter, on Christian Ehrhoff being placed on waivers:
We have a 23-man roster, and we have two kids that we want to look at in terms of Forbort and Gravel, so in order to do that, I would think it would’ve been one of two guys that would have to have been moved off our roster, or a forward to go down. So nothing other than that. Hey, there’s nothing wrong with Christian Ehrhoff. Look at the two other guys. We’re not exactly world beaters here. We don’t have the best defense in the league or the best team in the league. We’re trying to get better in a hurry. 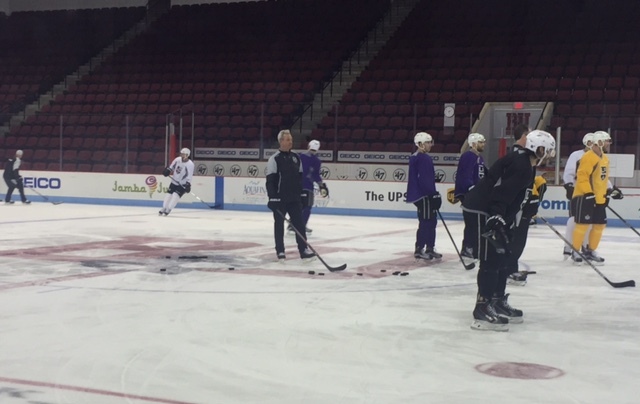