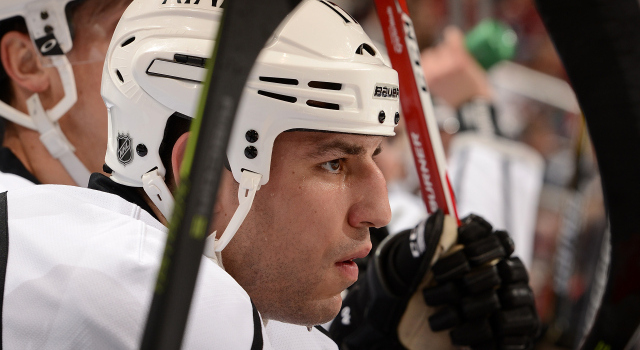 On his emotions coming into tonight’s game:
Yeah I have thought about it a little bit. Obviously there is going to be the emotional part of it, but at the end of the day you have to keep reminding yourself why you are here; to play a hockey game and try to get two points. With all the familiar faces and people you are happy to see again, you have to take a business like approach to tonight’s game. I think it will be a lot of fun and a hard fought game. There is lots to look forward for us, it’s the start of a seven-game road trip here. We want to start off on the right foot. For myself, it’s the first time I get to play in the Garden as a visitor. It’s kind of weird being in the away locker room here and stuff like that, but it’s nice to be back here in Boston and playing in front of the Bruins fans again.

On his memories as a Bruin when he comes back into the arena:
It’s the place that I started. I came here as a 19 year old rookie and end up having the success that I did, a lot of things cross my mind. Especially when you get to accomplish the ultimate dream of winning the Stanley Cup and doing it with the group of guys I got to do with, in the organization I got to do it with, in the city with the fans and everything. That’s what sticks out the most is getting to be a part of a Stanley Cup winning team on an original six team in a city where they really embrace their athletes and their sports teams. So those are the things that crossed my mind and things that add to the emotion of tonight’s game.

On seeing familiar faces around the building:
When you are here for eight years, you develop good friendships with a lot of different kind of people. I got the pleasure of meeting a lot of great people and working with a lot of great people, and I think that is what makes it a special thing to come back to a place like this. Like I talked about, when you have success in a place, it always adds to how special it is going to be. Like I said I am just looking forward to finally getting here yesterday after that long flight and looking forward to tonight’s game as well.

On what he thinks the fan reaction will be like:
(Reporter asked if he thought the fans would scream Looch) It wouldn’t surprise me if they did. I think I had a pretty good relationship with the fans and I think that’s why I said it’s exciting to be back to play here in front of them again.

On which player he is going to hit first:
Just anyone who get’s in the way, I guess. That’s the mentality you have to have.

On being an opposing player in this building:
It’s going to be different. A bit of a coincidence that we are going to be wearing our yellow jersey’s here tonight, so a bit of gold on, so that might make it a little but easier. It will different, different side, different room, getting ready for the game a little differently and things like that. Like I said you just have to remind yourself why you are here, and that is to win a hockey game and try to have the same approach as you do for any other road game.

On whether he had any hard feelings toward the organization after the trade:
No, there was nothing negative, no hard feelings or anything like that. I understood the situation leading into the off-season, and sometimes things don’t last forever. I was ready and prepared for anything. I was ready and prepared to come back here. I was ready and prepared if I had to move on. Luckily and thankfully I moved on to another really good team, another contender. The Kings are a world class organization and I have had a lot of fun being a King so far, so there is definitely no hard feelings in the trade, and there are definitely no regrets on my part in what I was able to accomplish here. Just good memories and good thoughts and I am pretty fortunate that I got to be a Bruin in probably one fo the best times to ever be a Bruin. They have only won six cups in the 92 years they have played, so like I said it was a great time for me here, a special time for me here, but I am also really fortunate that I was able to move on to a great team and a great organization like the Kings.

On playing during his contract year:
I am just focusing on the things I can control, and that is helping the team win. I haven’t been focusing too much on goals and assists and what I need to do to sign a big deal or anything like that. I have just been focusing on winning hockey games and things like that. That has helped my play so far throughout the season and I just have to keep focusing on that and winning hockey games. Looking at the team, we do have a really great team here with a really great chance to be a contender and just focusing more on that than the individual stuff.