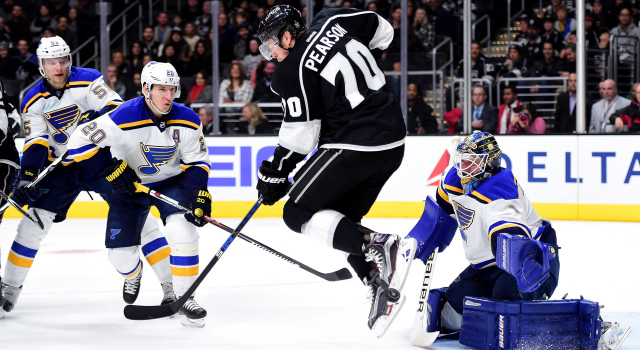 For Tanner Pearson, there have been thrilling days before, and there will clearly be some great days ahead.

He’s 23, and given the injuries he’s endured – a broken wrist, and broken fibulas in both legs since he was 15 – the winger has never played more than 66 regular season games in any junior or professional season. Now, through 51 games with the Kings, he has six goals and 21 points to his name. They’re respectable if modest numbers, and numbers he’s been stuck on or near for quite some time. With no goals and one assist over his last 11 games, the fourth-year pro has seen his ice time drop as well as where he fits into the Kings lineup. Against Anaheim on February 4, he played only 10:37, his third-lowest total of the year, and at practice on Saturday, was outside of the first four lines when the team rotated through line rushes.

“You know what? He’s gone through the very same thing that a lot of these guys go through,” said Darryl Sutter, who noted that “he’s having a hard time keeping up right now.”

“He signed a contract last year. I’ve seen it lots since I’ve been here with young players. Guys like that when they came here with the other guys. Tanner’s good. Everything’s in the right place – his head and his heart. He’s a boy.”

That he is, and the trajectory in a young player’s career rarely resembles a smooth, steadily sloped line. There are dips, peaks, valleys and crescendos, and at the moment Pearson is finding ways to dig himself out of a little bit of a mid-season rut. To do so, he’s been identifying aspects of his game that may need a little extra detail by watching tape.

“I’ve done quite a bit of video over the past few days trying to look at my game and look at how it needs to be and what it is right now,” he said. “I had a couple of good days regarding that, and hopefully I can get back to doing what I want to do.”

He is, of course, one third of the highly effective (if perhaps currently on-hiatus) That 70’s Line, and any assessment of Pearson’s career to date must make mention of him, Jeff Carter and Tyler Toffoli skating circles around Chicago Blackhawks defensemen in the spring of 2014 and forechecking relentlessly and winning puck battles to create chances for his teammates. He was a half-a-point-per-game player in the 2014 postseason – not too shabby for a then-22-year-old – and logged an impressive plus-10 rating as a key figure during the team’s second Stanley Cup.

Video is helping him re-establish that detail in his play.

“I think obviously [I’m focusing on] the compete level, winning and losing puck battles and that kind of stuff, and not turning pucks over, kind of being patient with the puck and letting it come to me,” he said. “At the end of the day, you’ve got to go to the net too to score some goals. It was a good look at stuff. It was good to try and get that state of mind going again.”

Again, this is all in line with the occasionally jagged progression that players at his age look to smooth out as they advance in their careers.

Tanner Pearson, on whether he got what he wanted out of the heavy practice schedule:
Yeah, I think so. I think the first two days we were just looking at our systems stuff and practicing that, and locking that down. You can’t be a team that wins one, loses one coming down the home stretch, so hopefully … we’ll string some wins together and have another good road trip.

Pearson, on whether the most recent practice schedule was like a “mini-training camp”:
I think it’s good to keep everyone in check and make sure everyone knows what they’re doing. I think for the most part everyone knows our systems to a T. I think we’ve had the same systems for however how long, but just another refresher never hurts the mind. It was a good couple days, and it’ll be fun to be on the road again.