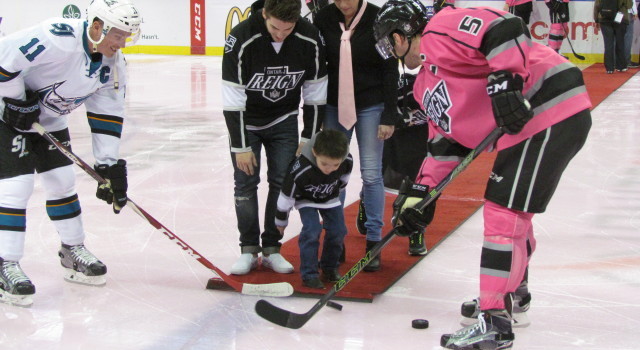 –Jonny Brodzinski’s been a line-hopper, but maybe he’s found a home with Kris Newbury and Adrian Kempe. On Jan. 21, Brodzinski actually told me that he had played with every forward on the team, except for Newbury. After this weekend, the rookie out of St. Cloud State can at least check that off his list. And on Saturday, Brodzinski scored for the first time since early January off a slick assist from Newbury. There’s a lot of speed and talent on that line and head coach Mike Stothers has noted before that Brodzinski and Kempe do like playing together (they are roommates as well off the ice). Although jumping from line to line can be perceived as a coach not liking a player’s performance or where that particular player fits in the lineup, Stothers stressed after Saturday’s game that that’s not the case at all with Brodzinski. “I’m looking at it as this guy’s pretty valuable. We can play him in a lot of places,” said Stothers. Brodzinski, with six goals and six assists in 39 games, has played and progressed well enough to earn the trust of his coach, too. “He’s just become a pretty reliable player,” Stothers said. “Usually when a coach is using the word trust and you’re using him in situations that means huge growth. I think there’s a lot of potential there. I’m a real big fan of his.” Even though Kempe was held off the scoresheet, his speed stood out (as it usually does) in the weekend back-to-back. This new-look line looks to be a solid second-line option for Stothers behind the Michael Mersch-Nic Dowd-Sean Backman combo going forward.

–You have to get the sense that San Jose is getting extremely tired of playing the Reign. With back-to-back wins over the Sharks affiliate on Friday (1-0) and Saturday (3-2) the Reign improved to 7-1-0-0 in the season series. Their head coach, Roy Sommer, sits at AHL career win No. 636, tied with Fred “Bun” Cook for the league record. In three tries now to either tie or break the record his old AHL teammate in Stothers has kept him winless. While in Friday’s game the Reign were in control, Saturday after a slow start and falling behind 2-0 after the first period they came back with a 3-goal second to win 3-2. It was the Reign’s third come-from-behind win against the Barracuda. The Reign beat them 3-2 in OT on Jan. 22 after falling behind 2-0 and did it earlier in the season on Dec. 13 in a 2-1 OT victory.

–Mersch has been a point-per-game player since being sent back down from the Kings on Jan. 15. He has an even six goals and six assists in 11 games and has been on quite a tear in the last four. The left winger was credited with two game-winning goals in team’s recent four-game winning streak.

–With the Reign carrying a full and healthy roster, particularly up front, it’s meant that at least one rookie is the odd man out on game days. It was Valentin Zykov this weekend, who was actually a healthy scratch in back-to-back games for the first time all season. With Mersch being back in Ontario and Newbury healthy, it’s typically been a rookie man-out rotation between Zykov, Brodzinski and Joel Lowry. The decision to scratch the Russian prospect in favor of Lowry seemed to be more about Lowry and less about Zykov. “I’ve liked Lows’ game,” Stothers said after Saturday’s win. “I thought the last time we were in San Jose, Lowry had a really, really strong game for us. And then we went and played San Jose last night here and we had a good game, a win, and didn’t really want to change anything. Basically a numbers game and come Wednesday, who knows, could be Brodzinski out. Just to keep you guys on your toes.”

–Goalie Peter Budaj’s shutout streak spanned three games and a few minutes into Saturday’s contest against San Jose before being snapped. The team’s MVP held opponents scoreless for 183:13 (64 saves) before giving up a goal to Ryan Carpenter. On the season, Budaj has almost as many shutouts (8) as losses (9). Friday’s 1-0 win against San Jose marked his league-leading 8th blanking, the next-closest AHL goalie has five (Albany’s Yann Danis). No goalie in the league has a GAA under 2.00 currently except Budaj with 1.58.

–The Reign wore special jerseys on back-to-back nights for the first time this season and were victorious in both. Friday was “Pink in the Rink” night and Saturday the Reign wore Valentine’s-themed jerseys to benefit Loma Linda University Children’s Hospital. In their five home games of non-traditional black and white Ontario jerseys, the team is 4-1 (Nov. 11/Military, 2-1 W vs San Jose, Dec. 12/Kings affiliation, 3-1 W vs Bakersfield, Jan. 16/Hot-rod, 4-2 L vs Bakersfield, Feb. 5/Pink in the Rink, 1-0 W vs San Jose, Feb. 6/Valentine’s 3-2 W vs San Jose).

–Hope everyone enjoyed the Super Bowl, I’m sure Stothers, who’s a huge Peyton Manning fan, did. Mersch gave a split pick on Friday night but did say he’d like to see Manning win on his way out. Paul Bissonnette was pretty candid in saying, “I think Carolina’s gonna smoke ’em,” but then retracked a bit saying if the Broncos scored first they might be OK.