After four days of learning, Kings finally hit the road 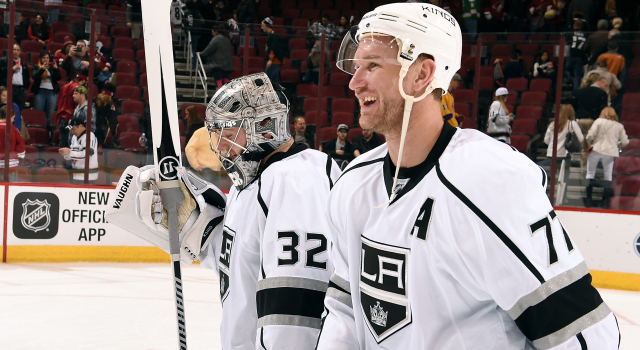 Because the Ontario Reign don’t always play mid-week games – they’re on a weekend-heavy, 68-game schedule – the team’s development staff has incorporated Development Days into the team’s rhythm. They’re detail and systems-reinforcing practices led by members of the team’s well respected development staff as well as coaches Mike Stothers and Chris Hajt. With a Western Conference-leading .714 points percentage, it could be argued that such an outreach has had a positive effect on the team’s play during periods when game action isn’t as regular.

Over the past four days, the Kings were faced with a similar break in the schedule. With no games between Thursday’s loss to Anaheim – one of the team’s two games in an 12-day stretch – and Tuesday’s road trip opener in Boston, the team held a pair of extended practices on Friday and Saturday, followed by a day off on Sunday and a special teams-oriented skate on Monday that continued to reinforce several themes before the team departed on its seven-game, 13-day road trip.

“We obviously weren’t happy with our last game, and the way we’ve been playing the last couple weeks, our consistency’s not there,” defenseman Jake Muzzin said. “So we went back to basics a little bit, got to work, focused on defending and some execution stuff, and I think it was good.”

The team looked to sturdy its detail and systems play – aspects of Los Angeles’ game that are traditionally sound under Darryl Sutter but may have slipped during a compacted schedule in January. The Kings are 7-6-1 since the turn of the New Year. It’s a record that they’re trying to improve, never mind that the team posted its best January record since the 2009-10 season.

But with skaters focusing on breakouts, transitions, compete drills and special teams play and leaving few stones uncovered during a lull in the schedule, how are the goalies affected by the schedule during a stretch in which they’ll go four full days without seeing pucks in live-game action?

“I don’t know if it was quite training camp, but we worked on a lot of teaching points as far as getting our forecheck, our neutral zone all intact, and we tried to put a lot of compete aspect of things in, and that’s the stuff that reflected on the goalies – competing on pucks, competing on rebounds, which forced the goalies into more game-like situations,” Bill Ranford said.

“It’s one of those things like anything, when you don’t get those maintenance days in throughout the month because of a compressed schedule, you start to lose that detail in your game sometimes, so this four days gave us an opportunity just to address some of those areas.”

Jonathan Quick, Jhonas Enroth and the rest of the Kings will face six opponents on this trip that are currently in a playoff position, as well as the New Jersey Devils, who are tied for the East’s final wild card spot but have played two additional games than the Pittsburgh Penguins.

“It’s a huge trip for us,” Muzzin said. “It could really help our season out if we do well on this road trip, and if we don’t do well, then we’re looking to be in a dogfight down the stretch again. I think we’ve done well on the road, and I think we’re excited for this road trip to do some big things.”

Bill Ranford, on working with goalies during extended periods of practice time:
I think it was an important four days for us just to get some work in. We haven’t practiced forever, so I think it was just to go through some different themes that we haven’t had a chance to do and actually get some work for our goalies. I think that’s the biggest thing we gained from the four days.

Tanner Pearson, on whether he got what he wanted out of the break in the schedule:
Yeah, I think so. I think the first two days we were just looking at our systems stuff and practicing that, and locking that down. You can’t be a team that wins one, loses one coming down the home stretch, so hopefully … we’ll string some wins together and have another good road trip.