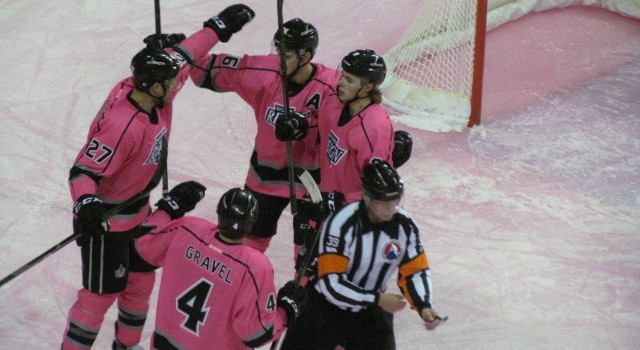 Reign game breakdown
The Pacific Division-leading Reign continued their dominance of San Jose Barracuda in a 1-0 win against the Sharks affiliate on Friday night in Ontario. The Reign (27-10-3-1) improved to 6-1-0-0 against the Barracuda (19-15-5-3) as goalie Peter Budaj posted his third straight shutout and league-leading 8th. Michael Mersch scored the lone goal on the power play at 13:52 of the first period, knocking in a rebound of a Kevin Gravel shot that had gone off Nic Dowd. The Reign couldn’t convert on three power play tries in the second period but were outshooting the Barracuda 23-5 after 40 minutes, setting up an interesting third period. The Reign were outshot 17-7 in the final 20 minutes but managed to hold the Barracuda scoreless on two power plays and last-ditch effort to score with goalie Aaron Dell pulled. With just under two minutes to play in the second period veteran Reign forward Paul Bissonnette left injured after going awkwardly into the boards in the San Jose corner but came back to the bench midway through the third period.

Best quote
Budaj, on what’s been working for him in the shutout streak: “Just trying to stay in the moment, not think too much ahead. Don’t think about what happened last game or what’s going to happen after. I know it’s cliché but it’s very true. You just try to focus on the next puck and focus on the next shot and everything’s going to take care of itself. As I said again, I can’t thank enough the guys in front of me. They play really well and everything, the system’s working. Guys are working really hard. The system can be great but if the guys don’t work, nothing works.”

Three stars
–Peter Budaj – Coming off the All-Star break in which he represented the Reign at the event in Syracuse, N.Y., the veteran returned right where he left off – with yet another shutout performance. Budaj made 22 saves in what was his 25th win of the season after posting goose eggs against San Diego (2-0) and Manitoba (4-0) last weekend. After not seeing much work in the first two periods, he had to be sharp in the third. And he was. The 6-foot-1, 33-year-old made two point-blank saves on Bryan Lerg and John McCarthy while the Reign were killing a too many men penalty and with just over three minutes to go in the game stopped San Jose’s leading scorer Ryan Carpenter on two whacks at the puck in close.
–Michael Mersch – It’s become commonplace to say Michael Mersch is scoring Mersch-like goals and the left winger came through with yet another but simply said afterwards, “Right place, right time. Worked out.” The tally was his team-leading 17th. He now has four goals in his last three games as he chases the 20-goal plateau. Mersch skated on Friday back on a line with center Nic Dowd and right wing Sean Backman.
–Aaron Dell – The San Jose goalie faced an onslaught in the first period, including a post hit by Kurtis MacDermid and two 2-on-1s for the Jordan Samuels-Thomas-Andrew Crescenzi-Justin Auger line. Allowing just one goal on the Reign’s 15 shots in the opening period was a victory in itself. Dell, an undrafted 26-year-old, didn’t have any help from his teammates in the scoring department but gave the Barracuda a chance to win in a 29-save night.

Turning point
San Jose finally showed signs of life in the third period and it was the only 20 minutes in which the Reign were outplayed. The late push at least made the game a little competitive considering the first two periods San Jose seemed to have left their legs on the bus.

Stat fact
–1 – Shot on goal for San Jose in the second period, tying the lowest the Reign have allowed in one period this season (third period vs San Diego in 3-2 loss on Dec. 19, 2015).

This and that off-ice
Friday’s ice at Citizens Business Bank Arena was painted pink for breast cancer awareness (for the first time ever, according to the team) for the “Pink in the Rink” night to benefit Susan G. Komen Inland Empire. The Reign also donned special pink jerseys that were sold in a silent auction during the game. … San Jose head coach Roy Sommer is looking for win No. 637, which would give him sole possession of the wins record as an AHL head coach over Fred “Bun” Cook.

Next up
The Reign and Barracuda meet again on Saturday night at 6 p.m. to finish up the back-to-back.