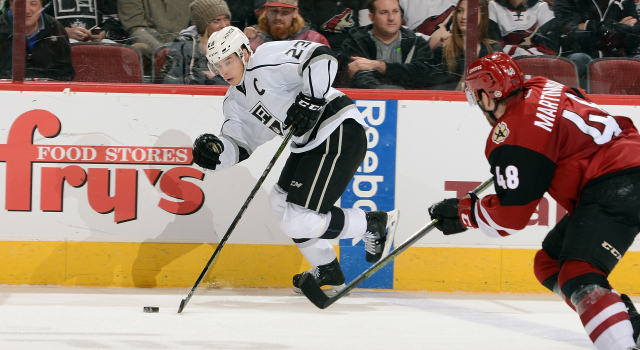 The Kings are in an interesting and unique predicament when it comes to setting up their schedule in advance of the annual Grammy Trip.

They’ll fly to Boston on Monday morning to open a seven-game swing that will also pit them against all three New York-area teams, Washington, St. Louis and Nashville. Prior to league play Friday, all seven opponents currently occupy a playoff spot.

But before embarking on this two-week challenge, they’re stuck in holding mode. They won’t play this weekend, though practices Friday, Saturday and Monday will be sandwiched around Saturday’s annual Tip-A-King fundraising event.

Because of outside circumstances such as Tip-A-King and travel, the Kings’ only practice that begins at a usual time was today’s skate in which players took the ice shortly before 11:00 a.m. and remained out for over an hour. It was one of those systems-oriented practices that aren’t too common at this point of the season but serve a key purpose towards reinforcing aspects of the team’s play that can become edged off or filed away during the long, 82-game season.

“It’s not too often that we have a chance to practice that hard,” Darryl Sutter said. “With our break that we have and how the schedule lines up, sometimes it’s really good to get a good, hard practice in. Work on the details of the game – that’s what today was all about. It was probably what we need.”

Sutter noted how the practice was important to make sure players don’t drift “two or three feet” out of position to where they need to be, a surreptitious tilt that has an effect on goals against. Los Angeles has both scored and allowed 29 goals over the last 10 games.

“We’re generally a really good goals-against team,” Dustin Brown said. “I mean, I can’t remember all the games, but we’re giving up three-four goals a game, we’re losing games, and that’s uncharacteristic of us. If you look at that, it’s probably the result of, quite honestly, not passing the puck well. When we pass the puck well coming out of our zone we’re allowed to get into their zone and forecheck and play that game that we are really good at, but when we’re not executing on our zone and executing coming out of our zone, we tend to play more in our zone and as a result play a lot more D-zone and [surrender] a lot more goals against. It’s just sharper coming out, I think.”

Hence, the work on positioning and a practice to shore up the detail in the team’s play.

“Much like today’s practice was getting back to basics, I think we need to use the break to get our heads wrapped around the road trip because you look at a seven-game road trip at this point in the season, this is a vital road trip for how our season’s going to end up,” Brown said. “If we can wrap around our heads around that and get ready to go, we can put ourselves with a really good position with a really good road trip and come back home in first place and looking to climb.”

With a road record of 16-7-2, they’ve to this point recaptured the degree of success away from Staples Center that has come to define their balanced play this decade.

“It is a long road trip, but given our current situation – where we are in the standings, what point of the year it is – it’s important to have that road mode mindset right from the get-go and maintain it, and you take it a game at a time,” Brown said. “But it’s important to make that long flight ready to go.”