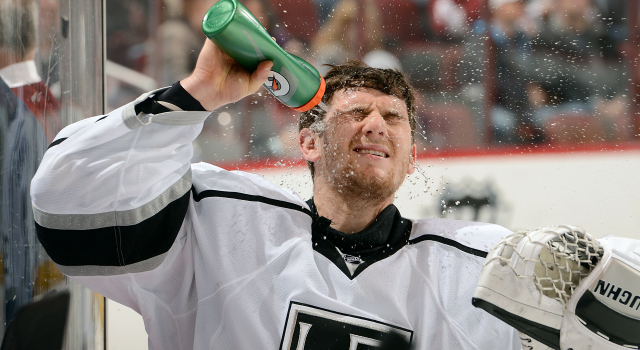 Good afternoon, Insiders. Let’s get down to brass tacks.

-The Kings held a full team practice in which everyone was accounted for. Practice lines, as grouped by color-coordinated jerseys, indicated no changes to the lines shown last night. Because the Kings don’t play until Tuesday and will practice three times prior to then, here are topics more worth our while than today’s practice lines: Good Morning landing videos from the 2013-14 season, noble gases, Pensacola Comic Convention and corn futures.

-The team practiced for well over an hour. This wasn’t some punitive measure undertaken by the coaching staff, but rather a way to maintain the team’s conditioning and detail during a break in the schedule. Had the Kings won 8-0 last night, they’d still have practiced for over an hour. “I think some guys need to get their fitness back up again, guys that haven’t been playing very much, and you can see it as practice goes along,” Darryl Sutter said. “If those guys are going to help us do anything down the stretch here, then they have to push their fitness up the next two or three days, today being the first day of that.” There’s more to come shortly in Darryl’s quotes, and how a two or three-foot difference in positioning (see: detail) affects the overall team performance and can be adjusted through systems-oriented practice.

-Several players on the team continued to break in their Forum Blue and gold equipment in advance of Tuesday’s game, when Los Angeles will wear its Legends Night jerseys and Boston will wear its road whites. Speaking of this Tuesday, I spoke with Luc Robitaille and Rogie Vachon this morning as I put together a feature on the 50th anniversary, a celebration that will officially begin next week and continue through next year’s All-Star Game. Lots, lots, so much more to come over the next 12 months.

-After today’s Sutter quotes, I’ll post a Dustin Brown story, followed by the details of a fun media panel I’m hosting tomorrow at Tip-A-King. Stay tuned, Insiders, and thank you for reading.