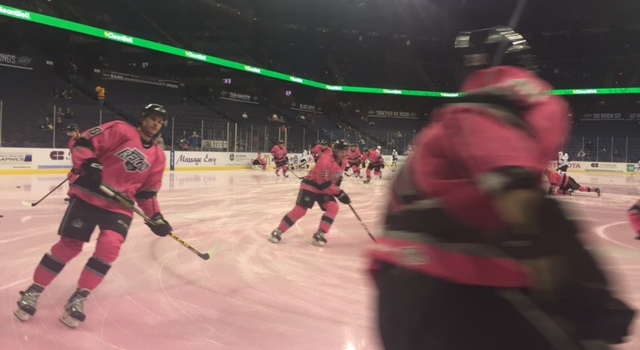 Head coach Mike Stothers, on the Reign’s effort:
I think we had 15 shots in the first period, so pretty happy with that. That’s the start we were looking for. Then it kind of tailed off, we had three power plays in the second, we didn’t generate much. And then the third, but that’s pretty much what you would expect when we play San Jose. If I remember right after two periods we had 12 shots from our defensemen, so that’s good. We want to get those guys contributing. But the other side of the coin is you go into the third and you’ve got no shots from Dowd, you’ve got no shots from Backman, you’ve got no shots from Newbury and you had three power plays. You want to look at it as glass half empty or glass half full?

Stothers, on the defense joining the offense:
They were doing a good job getting their shots through. I think Raine had four alone in the first period which might be what he had all season long so that’s terrific. The power play goal we got was a result of puck’s up top, it gets to the net front and who’s in front to put in the rebound? Big Mike, so it was great.

Stothers, on bracing for a big third from San Jose:
I didn’t even go in after the first because there was nothing really that I wanted to say because I thought we played really well. Now, there was nothing I really wanted to say after the second period either, other than to remind them to be guarded about the way San Jose plays and the fact that we had some power play opportunities and we knew we were going to get called for some, and we did, and not to let off the throttle. It’s a good team. Every game has been close and tight-checking. They don’t give you a whole lot and when they want to turn it on they’ve got some good guys. We got the the game. We’ll enjoy it here briefly and get ready for tomorrow.

Stothers, on playing San Jose three games in a row:
It’s kind of like a mini-playoff for us. We have played them recently so nothing too unfamiliar. Got to know a couple of their guys at the All-Star game, nice guys, good, talented people. I just think it’s a good matchup. It’s two good teams. Their goalie played well, our goalie played well. Who knows, tonight’s a 1-0 game, maybe tomorrow’s an 8-6 game. So long as we’ve got the 8 out of the 6, I don’t care.

Stothers, on staying focused while outshooting the opponent in a one-goal game:
It’s hard because you kind of think everything’s under control and that’s when you make a huge mistake. First period looked like we had control and I would agree, in the third period they were coming. That was a team that was desperately trying to score and even it up. They were pushing. They were pushing real hard. It’s a hard thing. It really is. It’s just something you’ve got to keep working on and hopefully going forward with the matchups against these guys we can continue to push and if we’re fortunate enough to make the playoffs it might be the way you have to play. You’ve got to continually push. It’s a 60-minute game.

Stothers, on Budaj’s play overall and a crucial save in the first:
He’s been pretty good. Just pretty good. I think the one that impressed me the most, it was in the first period and Dermy tried a pop-out pass into the slot and Budes was right there. A lot of times when you’re looking at the way the play’s been and it’s been in the other end, you can kind of let your mind wander. You could see how focused he was. He knew Derm was making the pass and there was nobody there and he just tracked it and followed it and that’s something that’s through experience. That something he knows that he’s got to be sharp all the way through and that’s the focus we all need for the full 60 minutes. I thought that was a huge play for us at that time. … He was dialed in, which was great. He hasn’t had much of a break with going to Syracuse and coming back and right back into the net. The concentration level on him is phenomenal.

Stothers, on Bissonnette’s injury:
He went into the boards pretty awkward there. And it wasn’t because of a hit. They were racing for the puck and I’m not sure what happened to him there but I know it wasn’t a push so I don’t have an issue with anybody on their team. It was just an awkward landing but I think it was good that it was more of his shoulder blades that hit the boards first rather than his head. He came back out and he said he was ready to go for the third. He seemed fine. … Sounded worse and maybe looked worse.

Michael Mersch, on his goal:
I was kind of in the high slot there and Dowder ended up in front of the net and I heard someone from the point yelling, “shoot it, shoot it,” so I just kind of went to the net and I think Dowder got a tip on it and the rebound popped right out to me. So, right place, right time. Worked out.

Mersch, on San Jose’s push in the third:
We were down to three lines and obviously Paul took a nasty hit there in the second period, hopefully he’s all right. Sounds like he was talking after the game and everything. We were going out we had to kill a few penalties. Our lungs were burning a little bit but that’s expected and then when you’re playing three and half lines I thought that kind of maybe allowed them to get a few chances in the third period.

Mersch, on the pink ice:
It was good. We played on it last year in Manchester and one time earlier this year in Stockton so kind of familiar with it. It’s tougher to see around the circles, the faceoff circles and blue lines kind of blend in with it a little bit but it’s for a great cause and we always want to show support for people with breast cancer, who’ve battled it before. It’s a special event tonight and just fortunate to get the win. [Reporter: Did you notice any difference in the quality of the ice?] We were joking around we thought it was better. The pink ice was better. I’m serious when I say that too, I don’t know what it is. It’s fun to play in. You’ve got the cool jerseys for the fans to take home with them and the money that they give for those jerseys go to great causes, too. All together it’s a great night.

Mersch, on his Super Bowl pick:
I’m thinking Carolina but at the same time want to see Peyton win because he’s on his way out. He’s been a great quarterback. He’s been fun to watch. … But Cam Newton is just as exciting and they have a great defense. I’m a Chicago Bears fan and there’s a few former Chicago Bears on the Carolina defense. I’m still up in the air right now.

Peter Budaj, on San Jose’s play early and their late push:
We know that they didn’t show us their best. No offense to their team, but I think we played really well but still the first two periods we were on them and I’m sure that their coach gave them a little pep talk in the dressing room because they came out really hard in the third and got some power play chances obviously. They’re a team that plays a very disciplined game and tried to stay close and capitalize on the power play. Our guys did a great job in front of me. They really block a lot of shots and they made my job easier, just a really good team win.

Budaj, on what’s going well for him during shutout streak:
Just trying to stay in the moment, not think too much ahead. Don’t think about what happened last game or what’s going to happen after. I know it’s cliche but it’s very true. You just try to focus on the next puck and focus on the next shot and everything’s going to take care of itself. As I said again, I can’t thank enough the guys in front of me. They play really well and everything, the system’s working. Guys are working really hard. The system can be great but if the guys don’t work, nothing works.

Paul Bissonnette, on the hit he took late in the second:
Lowry made a play where he got it deep and I knew I could beat my guy and I did and I lifted his stick and I know Lowry would have been going to the net so I lifted it and tried to make a quick play. I just caught an edge and next thing you know I was looking at the lights in the ceiling.

Bissonnette, on how he’s feeling:
Ready for bed. Eat first though.