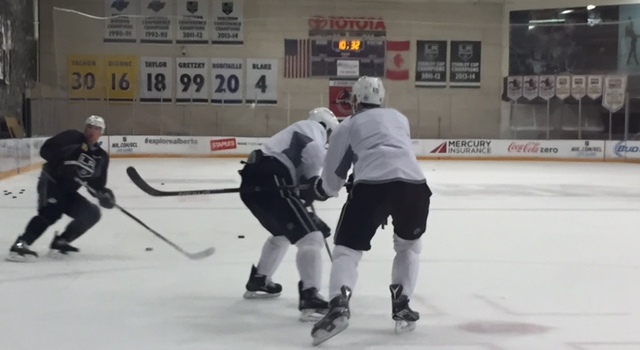 Good morning, Insiders, and welcome to a Thursday edition of LA Kings Insider. The team took the ice before 10:00 a.m. this morning, and line rushes indicated that Kyle Clifford, who hasn’t played since December 6 because of an upper-body injury, will return to face the Ducks tonight (7:00 p.m. / NBCSN / KABC 790 / I Heart Radio).

I arrived at the tail end of line rushes, but Rich caught ’em:

-Expect Clifford to see some time on the left side, as Pearson has often switched between right and left during his recent adventures up and down the Kings’ lineup. Also, expect the alignment to be affected by players lining up on their strong/weak side, so there could be some Clifford/Pearson movement back and forth.

-Christian Ehrhoff, Andy Andreoff and Jordan Nolan remained on the ice for extra work with Jhonas Enroth, so they’re not likely to play tonight. Jonathan Quick left the ice first and is expected to start in net.

-Clifford hasn’t actually been officially activated – only “recalled” from his conditioning stint – so expect an announcement of his activation from injured reserve prior to tonight’s game. “I’m ready,” he said. “I’ve done enough conditioning. I’m [looking forward to] getting in and helping the team win.”

-Anaheim is holding its morning skate at Staples Center, so reports on their lineup will start to trickle in at roughly 11:30 a.m. They’re virtually healthy, with Simon Despres (concussion) and Cam Fowler (knee) having rejoined the team from injury. Clayton Stoner remains on injured reserve with a hip injury.

The Kings defeated the Ducks, 3-2, in their first game, at Honda Center. The freeway rivals head to Staples Center for what should be another contentious game.

“We want to beat them and they want to beat us,” Boudreau said. “I don’t think much could happen during the course of one game that would make a team dislike another team more than they do already.”

Defenseman Cam Fowler said the Kings are a team that “forces you to play a man-style game.

“They certainly don’t give you anything free, so you have to earn every scoring chance you get, especially playing in their building. … You have to have your best stuff to have success against a team like that.”

-Today’s game is an NBCSN broadcast, so Nick Nickson will shift back to radio, and I’ll handle blog duties. Jim Fox will also play a part in tonight’s broadcast as an analyst.

Peace on earth, and on @NBCSN! I'll be with Kings analyst @JimFox19 and Ducks commentator Brian Hayward for LA/Ana at 7pm pt/10pm et.