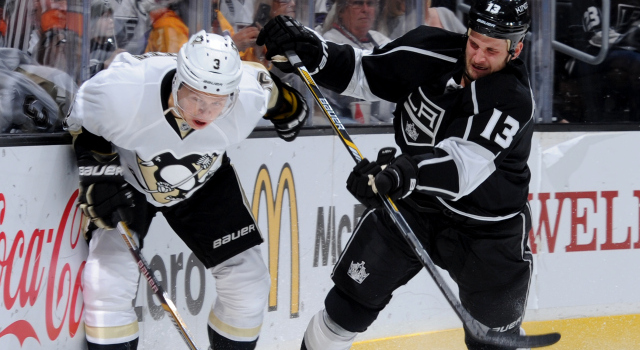 Kyle Clifford took line rushes alongside Nick Shore and Tanner Pearson this morning and appears ready to be activated and should participate in the second installment of the five-game Freeway Faceoff series when the Kings host the Ducks at 7:00 p.m. at Staples Center (NBCSN / KABC 790 / I Heart Radio).

The rugged forward got a taste of what to expect tonight when he suited up for the AHL’s Ontario Reign for two games last weekend as part of a conditioning assignment that included a game against Anaheim’s top affiliate in San Diego. The Reign won that road game, 2-0.

“It was good,” Clifford said of the AHL’s version of the rivalry. “It’s kind of like up here with Anaheim. Good arena, they had a sold out crowd. You can kind of tell it’s similar to our rivalry.”

The forward has missed the last 24 games after having absorbed what appeared to be a retaliatory, defensive elbow in the face from Tampa Bay’s Victor Hedman on December 6. Hedman received an elbowing minor on the play but no supplemental discipline. Clifford shared his thought on the play last month, telling LA Kings Insider, “It is what it is. There’s nothing you can do about it. The league made their decision. It’s in the past.”

In 26 games this season, the 25-year-old with 382 regular season games to his credit has three assists, a minus-four rating and 28 penalty minutes.

“You know what, Cliffy provides a role for us, but at the same time, as much as we put on everybody to be a good checker and a solid teammate, we need guys to get scoring chances, too, and finish a little bit, so we’re still looking for that out of our fourth line,” Darryl Sutter said. “Hey, we’ve got 14 guys now, touch wood. Everybody gets the opportunity. It’s not like you’re trying to take opportunities away, we’re trying to give everybody opportunities. Got to look at it also with Kyle, we asked him to go out and play some games so he was ready. Find out if he’s ready. As I said, he was a good team guy. He went and played. He didn’t have to.”

As for the conditioning stint, Clifford – who wore both a visor and the number 17 while with Ontario – took advantage of the return to on-ice action.

“[It was important] just getting the timing back, getting a lot of minutes, getting playing, getting thinking about the game, detail, everything that goes with being good, effective player,” he said.

Kyle Clifford, on whether he’s ready to play:
Yeah, I’m ready. I’ve done enough conditioning. [I’m excited to be] getting in and helping the team win.

Clifford, on potentially returning for a rivalry game:
It’ll be good. Obviously these are an important two points. That’s our focus going into this game. We need these two points, so it’s going to be a hard game.

Clifford, on the degree of balance and structure in the lineup:
Yeah, we’ve got a deep team, and we need that. We’re trying to make the playoffs here, and it’s not easy, so it takes 23 guys. You need four lines and six D and a few goalies.