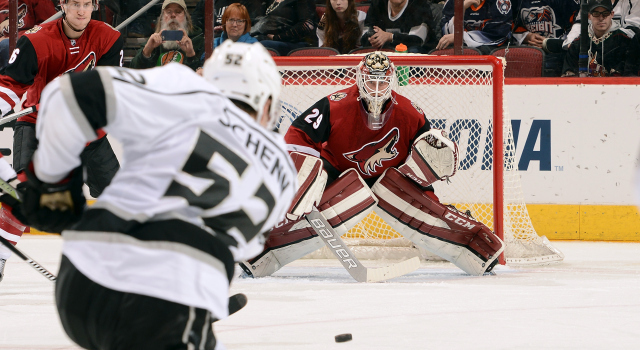 Luke Schenn spoke with several reporters after this morning’s practice and weighed in on a variety of topics including his impressions through four weeks as a King to penalty killing and the intricacies of playing in a warm-weather market. He also said that Oliver Ekman-Larsson (and, after the interview, Shane Doan, from the penalty box) told him that his first period hit on Ekman-Larsson in the defending zone Tuesday night was a good, clean hit.

Luke Schenn, on his initial impressions of Kings hockey:
Obviously it’s a totally different feel as far as just the whole mentality around here. There’s such a high expectation every game, and winning is everything here. It’s obviously a great culture and a great core group of guys that take charge. That’s kind of the thing I was most overall impressed with – just on a consistent, nightly basis everyone tries to play the right way. Not that winning isn’t everything in other organizations, but here it’s something they’ve established over the years and obviously something they’re trying to maintain and continue to push with.

Schenn, on teammates who have caught his eye in his first month:
Actually, there are quite a few guys, just because in the east you only play these teams once or twice a year. Obviously I knew Kopi was a star player, but I guess I didn’t realize just how good he was in all areas of the ice, and it makes the job a lot easier. Carter is pretty special. One guy I didn’t really know a ton about was Toffoli. He’s a really good player in all three zones and is always in the right spot and makes good plays, too. There are lots of guys. Obviously getting the chance to play with a bunch of different defensemen and rotating every night, and they’ve all got a lot of different special aspects of their game, too. A lot of underrated guys that probably don’t get the recognition they deserve.

Schenn, on last night’s penalty killing success:
First of all, guys did a good job clearing the puck. I think that’s kind of one thing that maybe goes a little underrated. Sometimes you don’t clear the puck and you get trapped out there a little bit and you get hemmed in and that’s when it creates more chances, so that and blocking shots and clearing the front of the net. The forwards did a good job pressuring up ice. Obviously you would rather not take that many penalties and put your penalty killing in that situation and be shorthanded that many times – I probably could’ve done a lot better job of that too – but in saying that, the penalty kill did a great job [last night]. I think a lot of nights special teams, if you win that battle, you’re going to win the game, and that was a good example last night.

Schenn, on doing “things the right way” and playing for a team that “expects to win”:
Yeah it is. Like I said, I’ve played in Toronto where you’re trying to rebuild and Philadelphia where you’re kind of on the bubble of the playoffs or not in the past few years, and everyone’s trying to get to this level, I think. I think this is one of the standards, for sure. Obviously there are a few elite organizations that have been consistent for the last number of years, but this is definitely one of ‘em. Just the core group of guys that they had that, like I said, play the right way every night. When your top guys play consistent in all areas it kind of trickles down through the lineup. That’s something they’ve established in the last few years. It’s fun to be a part of, and I guess the other challenging part is and the exciting part is when you are one of the top teams you get everyone else’s best every night as far as opponents, so everyone’s gunning for you. I know firsthand that was a challenge that we looked forward to when we came in this building. Just after New Years with Philadelphia, it was ‘you’re playing the LA Kings, so let’s get up for it,’ so I see that side of it, too.’

Schenn, on any differences in hockey culture in warm-weather markets:
It is definitely nice leaving the rink. Like you said, it’s not your typical hockey weather from growing up in Canada, and playing in Toronto and Philadelphia, it’s a little bit different climate. I don’t really think of that too, too much … but there’s no question, it’s refreshing getting away from the rink. And I think the big thing is it’s a great hockey market as far as when you’re at the rink, but it’s a nontraditional hockey market away from the rink, too, so you can just go about your business and live a pretty simple life, comparing, I guess to playing in a Canadian city.

Schenn, on the scrutiny players receive in Toronto:
Well, that’s just kind of how it is. It doesn’t matter if you’re the captain of the team or the starting goalie or the fourth line guy in and out of the lineup. Everyone will get stopped on a daily basis, whether it’s at dinner or the grocery store or wherever. It’s a cool experience to live. You wouldn’t trade that for anything, too, but at the same time, this is refreshing as well too, just go to the rink, show up, compete and play hockey, and you get to get away from it a little bit. But it’s very interesting seeing both sides of the league when you kind of can be in that bubble and then at the same time in other spots too where the hockey is great, you play in front of a sold out building and you have a great organization, but as soon as you leave the rink, you leave your work there.

Schenn, on his hit on Oliver Ekman-Larsson:
I think it was just about timing. I kind of made the read, and I knew that my feet came up but it was after contact, and I knew I didn’t hit him in the head. Then I went back into the dressing room. I honestly didn’t know why I had been kicked out for the period, and then I saw the replay. After the start of the second period, I was skating over to the penalty box and Ekman-Larsson came over and told me, ‘Hey, good hit, good clean hit,’ or whatever, so it was reassuring to know that he wasn’t hurt, and at the same time that it was a clean hit.