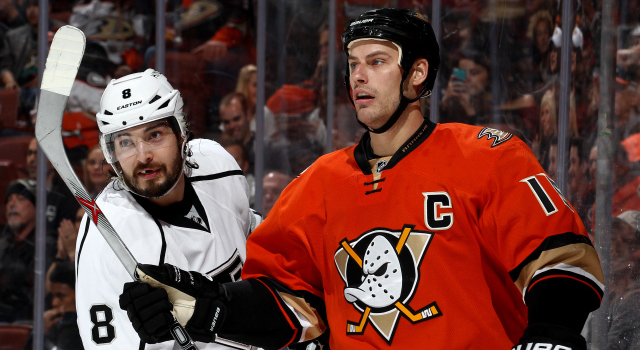 Good afternoon, Insiders. There wasn’t a ton of breaking news from today’s practice. It wasn’t quite an “optional” skate – Darryl Sutter clarifies that below – but not all players took the ice. Jonathan Quick didn’t lace up skates, but Bill Ranford did. One Conn Smythe winner swapped out for another.

If you’d like to send Bob a card, you can bring one to the Bailey’s Buddies Booth outside Section 117 on the main concourse tomorrow night or fill one out once there. The booth will provide cards. You can also send a card to Bailey, C/O Bob Miller, Staples Center, 1111 S. Figueroa Street, LA, CA, 90015.

-From practice: There wasn’t any controversy here, but both Oliver Ekman-Larsson and Shane Doan told Luke Schenn that his first period hit last night was a good hit. During last night’s broadcast, both Daryl and I were trying to figure out where the penalty was, as Schenn only left his feet through the momentum of the hit and made a clean, shoulder-to-shoulder check on Ekman-Larsson along the boards. Schenn clears up some of this, which contains some interesting revelations of the type of communication between players and officials over the course of a game. Story to come.

-Should there be time, I’ll also get to a story on Jonathan Quick’s experience at the All-Star Game, and a brief bit about getting to know John Gibson, but that might wait until tomorrow, depending on how the timing of stories works out today.

On the impact of special teams last night:
I think, what’d we have, it was 7-5 power plays, and if you did it – actually, you’re thinking after – it’s almost a whole period. If they’d have gone the distance – and there were two four-on-fours that broke it up – there was almost a whole period of special teams last night. If you look at a guy like Kopitar, he was up to 16 players or something like that after two periods. Most of it was related to that, so it’s not the ideal way for either team. So it was the team that was best at that game.

On managing players time in practice and games:
Yeah, it’s not ‘optional.’ Basically, you give them what’s best. The bottom line with this, you’d have to look at it as not the 30-game part, you look at it coming off the All-Star Break and then the two games and then with all the travel we’ve got coming up in the next two weeks starting Monday again, if you look at it, we practiced, what was our first day back, Monday? So you practice Monday afternoon. You have a pre-game skate Tuesday morning, you have a game Tuesday night, if you go today, you have a full practice at 11, and then tomorrow you have a pre-game skate and then you play again at seven tomorrow night, so you have guys on the ice six times, and if you go full practice six times to play two games in four days, it doesn’t work. The car’s going to run out of gas someplace. That doesn’t make sense at all. I wasn’t looking at 30, I was looking at two games.

On Anaheim wanting to play a “2-1, 3-2” game:
That’s their game. I mean, that’s how they’ve been really successful the last few years. A lot of it is based around special teams with them. Their penalty killing’s outstanding and they have really good goaltending and they’re pretty good down the middle of the ice. We have similarities in style, that’s for sure. Like I said earlier, it’s just a matter of time before they started pushing. [Reporter: Having them split up Getzlaf and Perry, does that make them even more dangerous?] I would think that it would be the same as looking at our team when guys are not all lumped together. They probably look at it more in the sense that it’s not splitting up Perry and Getzlaf, it’s more Rakell is taking a more prominent role as a centerman, so you’ve got Rakell, Getzlaf and Kesler as your three centermen in the top three lines, you can move wingers around. Just like we do. So you’re saying they’re playing together, well, they’re not playing together. When you win a few games and they’re not playing together, then you do it. When you lose a couple, then go back.

On whether he interacted with John Gibson in Nashville:
Yeah, just talked to him. They have good goaltending, that’s for sure. I would say that he’s the odds-on favorite to play on that team in the summer. [Reporter: The young team.] I think he fits into that, because I think that was one of the areas that he’s got to be [the guy], if he continues.