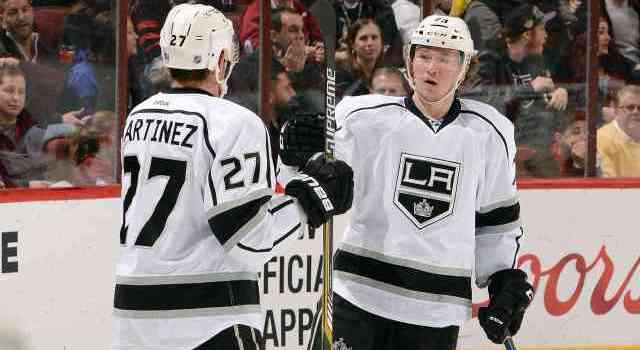 Darryl Sutter, on the power play:
All three of those goals are net-front. You look at Jeff [Carter] in front of the net on the first two and Lecavalier on the last one. Quite honestly the goal that tied it up was the momentum goal for us.

Sutter, on getting shots from in tight on Louis Domingue:
We had lots of shots, I think we outshot them just in front of the net.”

Sutter, on the focus after the All-Star Break:
All the teams in our division are in the same boat for the most part. You are fighting for a playoff spot and division games are four-point games.

Sutter, on the effort:
We have been a pretty good team on the road all year.

Sutter, on Dustin Brown’s play:
We should play Arizona more often, he would have 70 goals this year. Coming into today’s game three of his five goals were against Arizona. He has five in five, so he is on an 82-goal pace against Arizona.

Sutter, on the penalty kill:
Special teams were the difference tonight.

Dustin Brown, on whether this was the most complete game of the season:
It was a good game, but there was some sloppy plays coming out of our zone that we need to clean. You look at the first goal, we had full control and the puck ends up in our net. That is the kind of stuff that we need to focus on shift-to-shift going forward. I thought we continued to do the right things, regardless of the score and eventually we turned the tide.

Brown, on moving on from last time against Arizona:
The end of the second was key. We got two breaks, with the broken stick and Gabby [Marian Gaborik} doesn’t miss many shots when he has those types of looks. And my first goal was a good bounce, so we got a two-goal lead late in the second and that momentum helped us win.

Brown, on the importance of the win given the season series record:
No, it’s a division game, so it’s a four-point game for both teams. If you look at our last probably five games, we have got probably four out of ten including this one, so it was a huge win for us. Especially coming out of break, we didn’t finish the break the way we wanted and this was a good start against a divisional opponent.

Brown, on Jonathan Quick’s play:
I don’t think he got a lot of work the first half of the game, but the work he did get were some really good looks and good chances. You guys keep on asking questions about Quickie [Jonathan Quick] and the answer is always the same. He is one of the best in world and makes the saves we need him to make to give us a chance.

Alec Martinez, on the season series:
A couple goals there right at the end gave us some momentum to carry into the third. We have let teams back into games, so we had the mentality that we really wanted take advantage of our opportunities and keep our foot on the pedal. It was a penalty ridden third period and we got a power-play goal and another goal, along with a couple in the second.

Martinez, on his goal and Carter’s screen:
He did a really good job. When you are playing against the best goalies in the world you are not going to score on a clean shot, so to have Carts [Jeff Carter] there and Looch [Milan Lucic], and a lot of our forwards do a really good job. Obviously that goal doesn’t go in unless he is standing there.