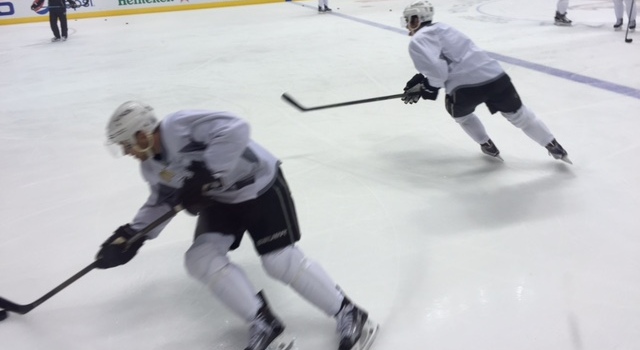 The Kings held a morning skate that convened at roughly 11:00 a.m. and aligned as such:

-Jonathan Quick left the ice first and is your presumed starter against the Arizona Coyotes. Based on rushes, Kyle Clifford, Andy Andreoff and Christian Ehrhoff are not expected to be in tonight’s lineup.

-There were some good Darryl Sutter observations that I’ll share shortly. One was of Dwight King, whose last couple games, according to Sutter, “have not been up to par.” The coach continued: “Hey, he’s an important player if he’s on his game because he can kill penalties and doesn’t take penalties and can play anywhere in your four lines. You can move him anywhere you want, but he’s got to be on his game.” Some interesting stuff to come.

-Of course, the last time Los Angeles played in Glendale was two Saturdays yonder, and there was a bit of controversy surrounding Milan Lucic, who was assessed a game misconduct and a subsequent one-game suspension for his gloved punch on an unsuspecting Kevin Connauton. Lucic wasn’t particularly concerned if there would be any type of response from the home team or home fans tonight. “I’ve been in this situation more than a few times. If there’s a response, I’m ready to respond, but … the most important thing for me and the team is to win the game.”

-The Coyotes, who are 11-2-2 against the Pacific Division and have points in all four games against the Kings this season, are expected to line up as such, according to Sarah McLellan of the Arizona Republic: Rieder-Vermette-Boedker, Domi-Hanzal-Duclair, Martinook-Richardson-Doan, Chipchura-Gordon-Tikhonov, Ekman-Larsson-Murphy, Tinordi-Michalek, Connauton-Stone. Louis Domingue, January’s NHL Rookie of the Month, is expected to start in net. Dave Tippett will coach his 1,000th NHL game tonight. Sutter shared some impressions of that coaching milestone, and I’ll post them as part of the upcoming transcript. 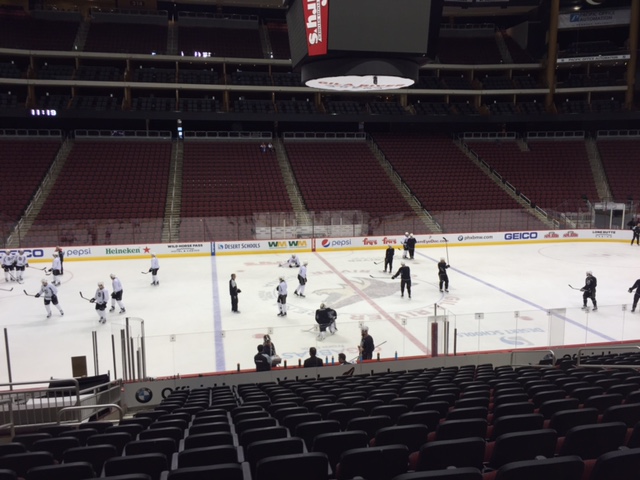