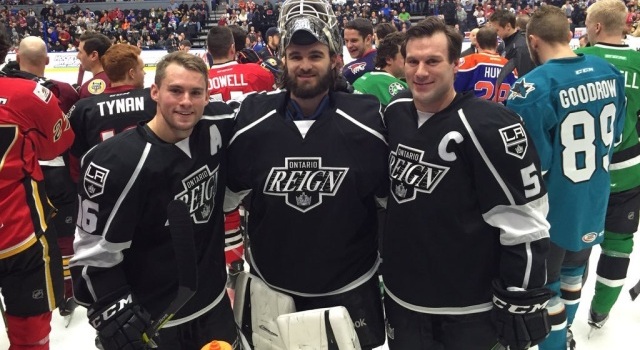 Traveling almost the furthest out of all, players and coaches alike, the Reign’s All-Star cast made a dent in Monday’s All-Star Challenge in Syracuse, N.Y., despite the Pacific Division not advancing to the final.

The round robin was split into six games between the four divisions (East’s Atlantic and North and West’s Pacific and Central) where the 9-minute mini-contests would be played 4-on-4 for the first half, and then 3-on-3 the rest of the way. The Pacific Division went 1-2, winning its last game against the Central, 6-4. Backman finished with a goal and two assists in the three games. The Central Division won the Challenge, defeating the Atlantic Division 4-0.

Budaj stole the show in the first of the six games, stopping all but one of the 16 shots he faced in a 1-0 loss to the North Division. The veteran netminder was beat by the Toronto Marlies’ Josh Leivo high, short side on a shot from inside the left circle with just 26 seconds left to play but his impressive play was noted on the telecast.

“I just like the way he prepares for a game,” Stothers said of Budaj during an interview on the broadcast. “His detail, his professionalism. He’s one of the hardest-working guys in practice and, you know what, you can see why he’s had a great NHL career and why he’s a terrific pro. He’s been a great influence on our young guys and he’s been solid and terrific for us in net all season long.”

In the Pacific Division’s second game Budaj was out of the net, but Backman instead factored in for the Reign with a slap shot goal from the right circle past Lehigh Valley’s Anthony Stolarz (Atlantic). It was the Pacific’s first goal and they went on to lose, 2-1. Ironically, Backman’s goal came while LoVerde was partaking in a TV interview from the bench.

LoVerde was asked about winning last year’s Calder Cup with the Monarchs before the Kings’ affiliate moved California.

“It was an awesome experience to obviously win with some of your best friends and your teammates, support staff and coaching staff,” the Reign captain said. “It was an unbelievable experience, it was a great time.”

“It’s going well,” LoVerde said when asked about the team’s move out west. “Obviously can’t complain about the weather. The travel’s a little different but it’s been great. Ontario Reign fans have welcomed us with open arms and it’s been awesome.”

For Stothers’ record in the event, he had a goal by Stockton’s Derek Grant to thank to not leave winless as the Pacific coach. Grant scored with four seconds left in regulation against the Central in a 6-4 win in the Pacific’s final round robin game (extra empty-netter with one second to go by San Diego’s Brandon Montour). Budaj played the second half of the game, stopping two of five shots.

The Reign return to game action on Friday and Saturday when they host the San Jose Barracuda at 7 and 6 p.m. respectively.