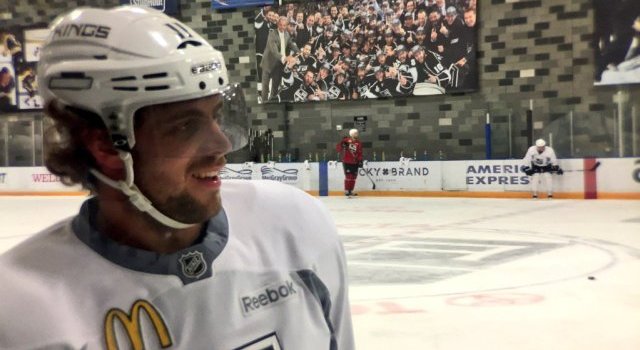 Good afternoon, Insiders. Here’s a quick practice update before I lose WiFi access for five hours or so…

-The Kings returned to the Toyota Sports Center ice for a practice that began shortly before 2:00 p.m. Neither Drew Doughty nor Jonathan Quick took the ice with the team after returning from Nashville last night. Grouped by colors, the Kings aligned as such (with a stick tap to Jim Fox and Alex Kinkopf for the correspondence):

-Today’s defensive pairings aren’t particularly revealing because of Doughty’s absence, but they were Martinez-Schenn, McNabb-McBain and Muzzin-Ehrhoff. Don’t read a ton into the incomplete D pairings until the entire team reconvenes.

-As for Kyle Clifford, today’s alignment doesn’t provide a firm indication that he’ll be in the lineup tomorrow against Arizona. To the contrary, that he was paired alongside Andy Andreoff as part of a two-person line could indicate that he may need an extra practice or two with the Kings before he returns to game readiness. Of course, this could be clarified by either Clifford or Darryl Sutter during media availability later today. Should Sutter speak in a media scrum, I’ll post the transcript later tonight.

Boys are back in town. Practice wrapping up pic.twitter.com/mgjHEAGPUB