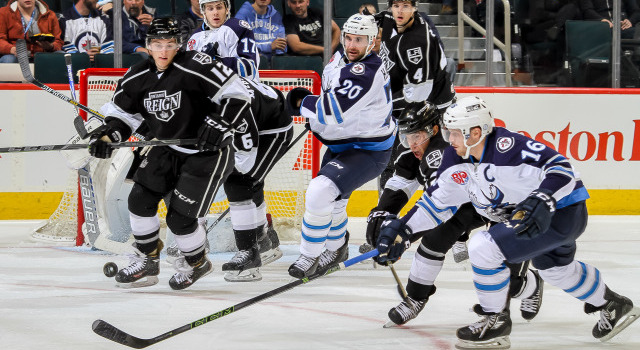 Note: Head coach Mike Stothers and the Reign’s All-Stars Peter Budaj, Sean Backman and Vincent LoVerde were not made available to the media to travel to the AHL’s All-Star Classic in Syracuse, N.Y.

Assistant coach Chris Hajt, on heading into All-Star break on a high note:
We break our season down into segments and again, we want to make sure we win as many games as possible in our segments. Finishing strong against a team that’s ending their road trip, and again, you want to finish on a high note for the All-Star break and have good feelings going into it. That was the main focus, playing our game and coming off a big win last night in San Diego, you want to keep that momentum going and I thought we did that.

Hajt, on Kempe’s play:
I thought he was all over the ice tonight. I thought he had a real solid game. He has elite skill and elite ability to carry the puck and create. There’s a rush there in the second period off a D-zone faceoff where he went through almost three guys and almost put it in the net. He has that ability to do those things and he’s rounding out his game in other areas, play on the wall and play away from the puck. He’s a good kid, he’s doing good and he’ll keep getting better. [Reporter: Kempe said he’s struggling in the offensive zone. What do you think about that?] When you look at the scoresheet at the end of the day you definitely want to see him on it, right? That’s a good thing that guys want to do that and they want to be on that scoresheet. You want to see that they have shots on goal, that they’re creating offense. Again, you’ve got to look at the whole game and what he’s bringing and how he’s bringing it. As long as he’s creating opportunities and getting in the offensive zone and doing what he needs to do he can keep building on it.

Hajt, on Forbort’s play so far with the Reign:
He’s playing well, there’s no doubt about it. We thought he had a real good game tonight right from the first shift. He was moving really well and moving the puck and being part of the offense but not taking away from his solid defensive play where he’s a big body who runs plays and is really lanky and long in how he plays. I definitely think he had a real good game and he’s really coming into his own.

Hajt, on smothering Manitoba:
I think it’s just, you have a lead and you want to continue what you’re doing. We talked a lot about advancing pucks, making sure that we’re moving north, not so much moving south, right? You want to keep putting the attack down in the offensive zone and kept getting pucks behind their D and making sure that we’re taking care of pucks. You don’t want to allow any team to create transition, especially in the third period with a lead, not to give them any life. For the most part we did a good job on that both games.

Hajt, on what he wants the team to improve on in second half:
You want to round you game out, right? As a team there’s always things that we need to work on. Play away from the puck, our systems, special teams, everything that needs to get better. There’s moments in games where, you know we’re in January but you’re preparing to try to play in June. That’s the ultimate goal and as a team you keep that in mind. Obviously our job as coaches is to do that and keep everyone’s frame of mind that way. Little things that you’ll bring up, puck along the wall or we talk about shot blocking and paying the price. A play like Biss, poking the puck off when they’ve been out there for a long shift. Those are plays when you’re going into the playoffs that, or at the end of the year, whatever it is, those are key plays and key moments to hockey games where it can win or lose you games. For the young guys and obviously the guys that are veterans, where here last year, those are important moments and teachable moments.

Hajt, on the explanation from refs on the no-goal call in third:
He just thought that the goal was in, so he blew it down. That’s basically it. It’s unfortunate, but it is what it is. They went back upstairs to look at it and obviously hit the cross bar and didn’t go in.

Michael Mersch, on the win:
I thought the first goal was huge for us, Newbs to get on the board, he’s going to be a big part down the stretch here. That was a good play from Backs to Newbs and Newbs was able to put it in. And then we just kept pushing from there. Got all four lines going again which helps everybody stay in the game and everybody’s fresh and we’re able to keep the attack.

Mersch, on the two shutouts going into the All-Star break:
Budes has been outstanding for us and it obviously shows, he’s in the All-Star game, he deserves it. When Manitoba Moose were in St. John’s last year he played for them so I’m sure it was good for him to get another win against them. He deserves it. He works hard in practice and it shows in the games.

Mersch, on plans during All-Star break:
I’m heading home. Rest, so both. My girlfriend lives in Chicago, so go visit her and spend time with my family, too. Just going to lay low and enjoy some time at home.

Mersch, on the first goal he scored:
We had a little bit of offense and were in their zone for a little bit. Forbs had a good shot from the point and I was actually going to pass it to Backs on the backdoor and it hit off the guy’s shinpad and went in.

Mersch, on weathering through a penalty-filled first period:
It was kind of funny how the game started. I don’t know, I have to look at it to see on video what the call was (on his first penalty), they called me for interference or something off the faceoff. Thought my stick was on the ice. And then Cormier got a penalty for them, and then I got another one, and then Cormier got another one for them, too. We were sitting in the box staring at each other like, ‘what’s going on here?’ You’ve just got to focus on your team game and yourselves and whatever happens with the refs you can’t really control so you’ve just got to focus on yourselves and stay positive.

Kris Newbury, on the wins going into the break:
It feels good. Anytime you’re going into a break you want to end on a good note and I think we did that. Obviously we’d like to have the one in Stockton but it’s the game of hockey, things happen. We’re happy to end on two wins.

Newbury, on how he feels after two games back from injury:
Yesterday I felt a little rusty, I was gasping for air. Tonight, I felt a lot better. It’s kind of weird how those things happen – two games in two nights and you feel better in the second. I’m hoping to keep getting better each and every game.

Newbury, on his goal:
It feels nice. Backs made a great play there and I was just looking to get it to the net and it happened to go in, so bonus for me.

Newbury, on the All-Star break interrupting his return after injury:
I’ve had like five All-Star breaks it feels like. Most of them have been a little longer than expected. It’s just timing of the business and stuff happens. I’ve got to be ready when we come back and start playing and come back where I left off tonight.