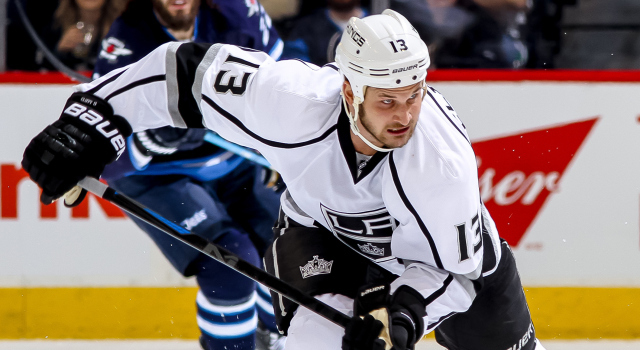 In Kings forward Kyle Clifford’s two-game conditioning assignment with the Reign while the NHL is on its All-Star break, he participated in back-to-back shutout wins for the Pacific Division-leading AHL affiliate. Clifford, who has not played an NHL game since taking an elbow to the head from Tampa Bay’s Victor Hedman in a Dec. 6 game, had six shots on goal and two penalty minutes in the Reign victories (2-0 Friday in San Diego, 4-0 Saturday in Ontario vs. Manitoba). After playing left wing both nights on a line with center Andrew Crescenzi and right wing Justin Auger, Clifford spoke to the media following Saturday’s win about his first two games back and his thoughts on the Reign.

Clifford, on how he’s feeling after the back-to-back:
It was quick turnaround but I felt good. I thought the boys played well and obviously Budes posted another shutout. He did a great job and put the team on his back.

Clifford, on taking contact for the first time in a game setting since the injury:
It’s good. After the first shift it kind of feels like you haven’t been away so it was easy to get back playing and it’s just good to get the two wins, too.

Clifford, on a timetable for his return:
I’m cleared to play so it’s just a matter of staying ready when my name’s called.

Clifford, on the Reign’s system emulating the Kings’:
Yeah, it was almost seamless. Pretty much identical and Stuttsy and Hajter did a great job just making sure I was aware of what was going on. They had maybe one or two different changes but other than that it’s pretty seamless.

Clifford, on if he experienced any rust:
Been out for extensive period of time so there’s definitely a little transition period there but the more minutes you get in, the better you feel and the more natural it feels.

Clifford, on his thoughts of the Reign:
They welcomed me with open arms and they have a great group in there. Great coach and staff, the trainers are awesome, the players are awesome. They’ve got a lot of high-end skill guys and a lot of guys who are going to be in the NHL and make an impact.

Clifford, on similarities between the Kings and Reign:
It’s funny, it’s kind of like our locker room. The team’s real close and the guys have a lot of respect for one another and they respect what each other does and it just seems like everybody’s got a role and everybody’s got a fit.

Clifford, on playing with Auger and Crescenzi:
They’re both two-way guys and they’re big boys. I felt like a little guy on the line. Augs is good on the wall, he’s good taking pucks to the net and Crescenzi’s always there for ya and lots of talk so you can trust him as a centerman. You know where he’s going to be and both guys were really easy to play with. [Reporter: Anything you see that they can improve on?] Just timing, they get the reps in and they’re going to be good players. They’re both big boys that can skate and they’ve got good hockey sense.

Clifford, on plans during the All-Star break:
Just head home and take a day to relax and spend some time with the family and enjoy it.

Clifford, on his new helmet:
I got a new helmet. Bauer bought Easton so you can wear both companies now. [Reporter: Is the visor for the AHL or something you may bring into your game?] I don’t know. I didn’t mind it down here … but I definitely like playing without it, so we’ll see.

Clifford, on comparing Sutter and Stothers:
They both demand they best out of you. They’re actually kind of similar in style of coaching and they keep you honest and they want guys who put the work in and work smart.

Assistant coach Chris Hajt, on what Clifford brought to the Reign:
He’s a Stanley Cup champion, you can see it just the experience in situations where you need a puck out on the wall or you need a good forecheck. He had a lot of really good chances I thought in the two games that he played, cutting off the wall and getting pucks to the net. Obviously he’s a presence and has a big name that he’s made for himself. It was nice having him. He carries himself really well, a really good teammate and brought a lot to the team for the two games he was here.

Note: Reign head coach Mike Stothers was not made available to the media after Saturday’s game due to travel for the All-Star Classic in Syracuse, N.Y.