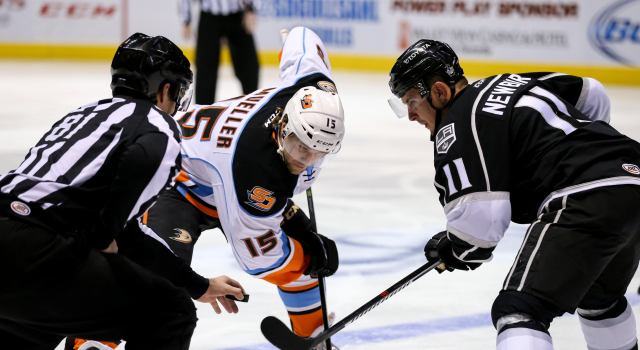 Reign game breakdown
Michael Mersch scored with six seconds left in the first period and Peter Budaj collected his league-leading sixth shutout with 21 saves as the Reign (25-10-3-1) defeated the San Diego Gulls (19-18-1-1) 2-0 on the road Friday night. The game was Kings forward Kyle Clifford’s first of his conditioning assignment with the AHL affiliate and also his first since Dec. 6 of last year after taking an elbow to the head from Tampa Bay’s Victor Hedman. Skating on the left wing with center Andrew Crescenzi and right wing Justin Auger, Clifford played generous minutes and had 3 SOG and 2 PIM. Reign head coach Mike Stothers said afterwards via text that Clifford, “gave us a solid performance,” adding, “it was nice to see him back on the ice for some game action.” A second period power play goal by Jeff Schultz rounded out the scoring.

Three stars
–Michael Mersch – The left winger scored his team-leading 14th goal of the season and second since his return after being sent down by the Kings in the waning seconds of the first period. Mersch reached high to glove down the puck after a Gulls pass through the middle was deflected by the Reign’s Ryan Horvat. Mersch played it down to himself and blasted it from the slot by Gulls goalie Matt Hackett, who finished with 28 saves. Stothers credited Mersch after the game, saying, “They got a little sloppy on the outlet pass and Big Mike wasted no time getting the puck to the net before their goalie could set up.”

–Jeff Schultz – The word scoring and Jeff Schultz don’t go together often, but the veteran defenseman certainly showed some puck savvy on his second period power play goal at the 5:52 mark. Schultz crept into the Gulls’ zone unattended while the focus of all four San Diego penalty killers was in the corner to the right of Hackett. By the time the puck got to Adrian Kempe who was working with Nic Dowd along the boards (both forwards got assists on this goal), Kempe could see Schultz wide open and with two quick dekes the puck was by Hackett for Schultz’s second of the season.

–Peter Budaj – Late Saturday, the Reign netminder will head to Syracuse, N.Y., to represent the Reign in the AHL All-Star Classic, but first on Friday he earned yet another win, his 23rd. That mark is tied for the AHL lead with another former NHLer in Rockford’s Michael Leighton. Budaj’s started 34 of the Reign’s 39 games as they continue to stand first in the Pacific Division and second in the Western Conference.

Turning point
Reign rookie defenseman Kurtis MacDermid took a boarding penalty, pushing Harry Zolnierczyk into the corner while he was a few feet away from the boards to the left of Budaj 4:47 into the final period. The ensuing power play led to the Gulls’ best opportunities of the night, including a post hit by top Ducks prospect Nick Ritchie. But the Reign completed the kill, their final one of the night, to finish a perfect 3-for-3.

When MacDermid took the penalty, he drew boos from the announced 11,583 at Valley View Casino Center. It was his first game in San Diego since his hit on Dec. 26, 2015, knocked Matt Bailey out of the game and later resulted in a 12-game suspension from the league. As MacDermid indicated he might on Thursday, he had to “answer the bell,” and fight Stu Bickel just 6:47 into the contest.

Stat fact
–2 – Straight shutouts for the Reign and Budaj against the Gulls, dating back to a 5-0 victory on Jan. 15 in Ontario, which was Mersch’s first one back with the team after being sent down by the Kings.

This and that off-ice
Prior to the game, the Reign released center Derek Army from his pro tryout contract and sent him back to the ECHL’s Wheeling Nailers after 12 games with the team. The move made room for Kris Newbury’s return after missing 12 games with what was categorized as a “mid-range injury,” by Stothers.

Next up
The Reign will play their last game before the AHL All-Star break on Saturday as they host Manitoba at 6 p.m. Ontario dominated the Jets affiliate 4-1 on Jan. 20 in the last meeting between the two teams. It’s expected to be Clifford’s last game with the Reign before he goes back to LA.