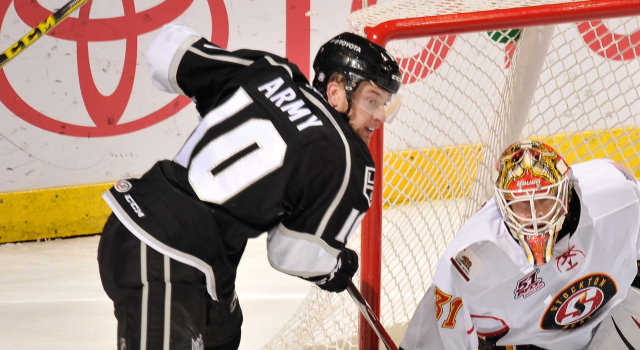 The Reign announced on Friday that center Derek Army has been released from his pro tryout contract and sent back to the ECHL’s Wheeling Nailers.

The move was first tweeted by the team’s Director of Communications and Broadcasting, Joey Zakrzewski, just hours before Friday’s game in San Diego against the Gulls.

With center Kris Newbury slated to make his return to the lineup after missing the last 12 games with what head coach Mike Stothers has called a “mid-range” injury, the Reign are a much healthier group than when Army joined them.

The durable center was brought in on Jan. 2 from Wheeling before the Reign hosted Charlotte after it was known that Newbury would not be able to participate in that game. Army had an assist that night in a 4-2 loss and went on to play in 12 total games with Ontario.

The North Kingstown, R.I., native scored his first AHL goal on Jan. 15 in a 5-0 victory against San Diego. His goal in that one stood as the game-winner. In 12 games with Ontario he had one goal, four assists and 22 shots on goal and filled a second-line center position.

Sorry, the comment form is closed at this time.