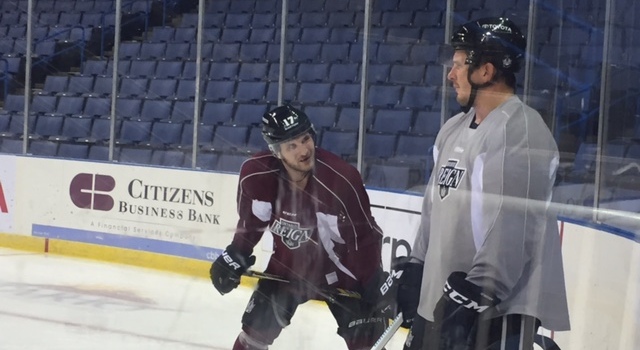 Greetings from CBBA, where the Reign held a 1 p.m. practice after a long haul back from Stockton. I’m back with the Reign, too, following a brief call-up to help LA Kings Insider last night. Lots going on with the AHL side, so here we go …

–First off, if you’re looking for notes on Kings forward Kyle Clifford and his conditioning assignment with the Reign, go here for all the info.

–Center Kris Newbury has missed 12 games with what head coach Mike Stothers has called a “mid-range” injury. Stothers confirmed after practice that Newbury will be back for tomorrow’s game against San Diego. Newbury once said that he doesn’t like anyone on the Gulls’ team, so making his return against the rival is something he’s happy about. “I feel good, obviously excited and couldn’t ask for a better team to come back and play the first game in a while against. It will be fun,” Newbury said. Newbury said he’s pain free and Stothers will have him center Adrian Kempe and Sean Backman. “You miss a guy like that, he’s a good player,” Stothers said. “He’s a good American Hockey League player. He’s experienced, he’s gritty, he’s hardnosed. He’s good on faceoffs, he makes plays.” Backman and Newbury played together earlier this year and Stothers added he’s going to try putting that touch of chemistry back together.

–Defenseman Derek Forbort was back in the lineup on Wednesday for the Reign’s 2-1 OT loss in Stockton and Stothers said, “he was good.” Forbort was a surprise scratch the game before last Saturday in San Jose with a lower-body injury. “I feel good,” said Forbort. “It’s kind of just something that’s been bothering me for a little bit. It’s getting better.”

–On Tuesday, Backman was added to the AHL’s All-Star Classic, and will head off the Syracuse after the Reign’s Saturday home game with defenseman Vincent LoVerde and goalie Peter Budaj. “It’s a huge honor to go represent the Reign in Syracuse,” Backman said. “It’s really exciting. I’ve never been to an All-Star Game before, this will be my first. To go with my roommate (LoVerde) and Budes is really exciting.” The league is using a new 3-on-3, 4-on-4 format, which should give Backman a chance to showcase his speed. “I was talking about that with some of the guys earlier, and obviously the NHL’s going to do it with their All-Star Game so we’ll get to see it before we do it. I think it will be fun. I enjoy the 3-on-3 during the regular season. It’s a lot of fun, especially for a player who can skate like me. I think it will be fun. When we were younger we used to play those small games as a kid and kind of brings us back to that. So I think it will be competitive and a good time.”

–The last time Kurtis MacDermid was in the Reign lineup against San Diego, he delivered a hit on Matt Bailey that resulted in a 12-game suspension way back on the day after Christmas. That game was also in San Diego, so Friday’s game back in the Ducks affiliate’s home arena will be hostile territory for the Reign defenseman. “You never know,” MacDermid said when what he expects it will be like on Friday. “Just going to go into it like any other game. I’ll just focus on playing my game and helping the team win.” But if there is a response from San Diego, he will be ready. “I always have my head up, obviously, and tomorrow I may have to answer the bell and if that happens then I’ll answer the bell. It’s part of hockey, so just keep playing my game.” MacDermid’s now played in two games after missing most of January and has been happy with how his body has responded. “It feels good to get back, obviously,” he said. “Legs have felt pretty good so I’m happy with that because I put in a lot of hard work while I was out. Just got to keep going.”

–All players were on the ice for practice with the exception of defenseman Nick Ebert (upper-body injury). … Alex Lintuniemi, who was working with the Reign while rehabbing from wrist surgery, has returned to the Manchester Monarchs.