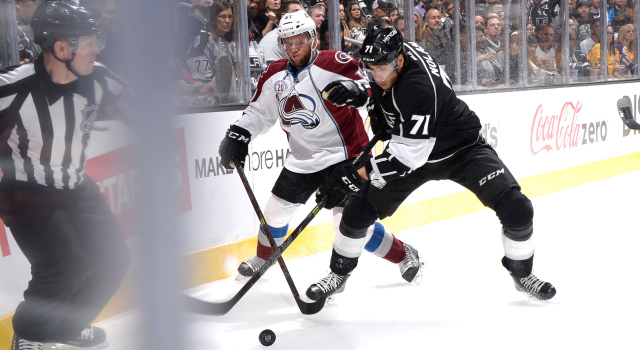 Anze Kopitar, on the breakdown for the Kings:
Kind of stopped playing there and started watching. They got two quick ones on us and then it’s a brand new game. Again, after that we just took too many penalties. They got a couple power play goals and that cost us.

Kopitar, on where the team’s at going into All-Star break:
We are in a position where we want to be, obviously. I think last 5 or 6 games were definitely not the best and we’ve got to make sure coming back on Monday, obviously playing Tuesday, that we’re as sharp as we were before and get it going again. We realize that this is not the way that we got to play. The ground that we gain on some teams, it’s going away quick so we’ve got to make sure we keep on going.

Kopitar, on what’s been missing those 5 or 6 games:
I just don’t think we’re playing good enough for 60 minutes. We got spurts where we play really good and then there’s a little dip in our game and we’ve got to correct that.

Kopitar, on the news about Bob Miller:
Obviously he’s been here [more] than probably half the team combined. I found out on Twitter and I don’t think that really had a big impact on the game tonight but obviously everybody hopes that everything goes well for him and hopefully we can see him as soon as possible.

Kopitar, on what’s not clicking:
We’re taking a little bit, obviously too many penalties. We’re putting ourselves in a position where we’ve got to defend instead of really going after it. Again, it’s not the worst time to do it either, now. Rather do it now than down the stretch. But, again, when we come back we’ve got to make sure we correct that and get it going again.

Dwight King, on his goal:
I just hopped on [the ice]. It was Jordan who made the play. I just went to the net and he found me.

King, on losing before the All-Star break:
No matter what time of year, obviously when you have two leads in a game you should be able to close it out. We let it slip tonight and that’s something we can think about for the next four days.

King, on the last goals being uncharacteristic ones for the Kings to give up:
I think our penalty killing and just our play in general was a little slow tonight. They move the puck pretty well but, like you said, it’s not like us. It’s something we want to look past and get better.

Alec Martinez, on the difference in the game:
If you want to win in this league you’ve got to play a full 60. I thought we had a good start but we didn’t maintain it.

Martinez, on the penalties and power plays opportunities for Colorado in the third:
I’m not going to comment on the goals but special teams are really important and often times they’re the difference in the hockey game and that proved true tonight.

Martinez, on the losing heading into the All-Star break:
Well, you’ve you got to look at it, learn from it. Use these few days to take some time away from the game. Maybe rethink what each guy has to do a little bit better once we come back here and what we’ve got to do better as a team.