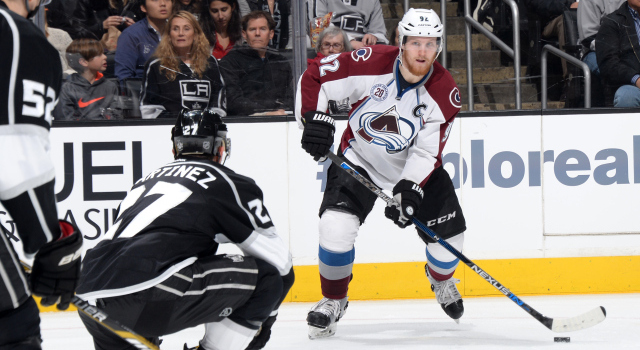 Head coach Patrick Roy, on the comeback in the second:
Especially after the first period, we didn’t have a good start. Coming back against a team like this shows a lot of character from our players. It’s the third time in our last give games that we’re coming back after being behind after 40 minutes of play. It shows our players are being resilient. It was an important one for us.

Roy, on the performance of goalie Calvin Pickard:
He was phenomenal in the first period. Thank god he played that well. We gave up two goal. For someone watching the game, they say, ‘Oh two goals, that’s not good,’ but with the chances they had, it was pretty solid. Then the score was 2-1. Two goals after that, start of the second period, Duchene and Landy on the rebound, it seemed to me that gave a lot of confidence to our team. Then in the third we kept pushing and pushing. At the start they jumped back at us really hard, and seems like we had a bit of a hard time with it.

Matt Duchene, on the win:
It feels good. This is the hardest building to play in in hockey, and it seems like every time we come here they shellshock us in the first, and a lot of time we aren’t able to come back. Tonight we buckled down and took control of the game after the first period, and did a great job.

Duchene, on the loss last night in San Jose:
Good teams throw those away. You can’t dwell on those. You learn the lessons and you go from there. It’s the same when you win a big game. This is the sign of a good team. You look at the best teams in the league, these guys being one of them, that’s what they do, it’s just even keeled all the way.

Gabriel Landeskog, on his two goals:
It felt good. There have been some tough times getting on the scoresheet lately for me personally, and it feels good to contribute. Obviously that is what I want to do, and as an offensive guy I want to help out, but I am just trying to help out. I am just trying to play hard and play with Carl and Blake and trying to simplify things together.

Landeskog, on the Avalanche’s performance:
This was an emotional one. Some games aren’t and some games are and this was definitely an emotional one, especially coming off of a tough loss last night. We wanted to bounce back, and every time you go into a break like this the last game you play is also fresh in everyone’s minds, and you want to build off of that and feel good about yourself during the break. We wanted to make sure that we played as good as we could. We felt like we had a tough first period and didn’t play how we could play, but in the second and third we had a solid effort by everyone. It started with #31 in the net.