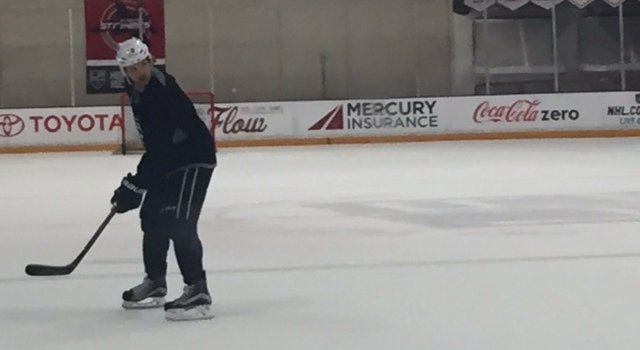 Good day to you, Kings fans. After a day off Monday, the team took the ice at Toyota Sports Center at 10:00 a.m. Tuesday and were grouped by jersey color.

-Defensive pairings remained the same: McNabb-Doughty, Muzzin-Martinez, Ehrhoff-Schenn, Clifford-McBain. Kyle Clifford has been skating as a fill-in on a defensive pair during rush-type drills as he continues to work his way back from an upper-body injury suffered on December 6, but isn’t likely to play tomorrow against Colorado. The lead photo is of Clifford remaining on the ice for some extra work, even if it doesn’t look anything like him.

-It is unclear whether the Kings will face goaltender Semyon Varlamov tomorrow.

This story from 9News says the civil lawsuit brought against him by his former girlfriend began Monday. The Avalanche confirmed Varlamov is not with the team in San Jose, where it plays the Sharks on Tuesday night, and he might not be available during the two-game road trip that concludes Wednesday in Los Angeles. Varlamov was the scheduled starter against the Kings.

The Avalanche called up Roman Will from AHL-San Antonio to back up Calvin Pickard for tonight’s game in San Jose.

-More to come later today, including stories on the team’s record on the second night of back-to-back sets, and, if there’s time, Matt Greene’s absence from the dressing room. I have a doctors appointment at 3:45 p.m., so there will be a delay in posts this afternoon. Enjoy your Tuesday, Insiders.

Guess who this is in goal at @Avalanche practice? That's right, it's coach Patrick Roy! #NHL pic.twitter.com/fjhHBKQjZh