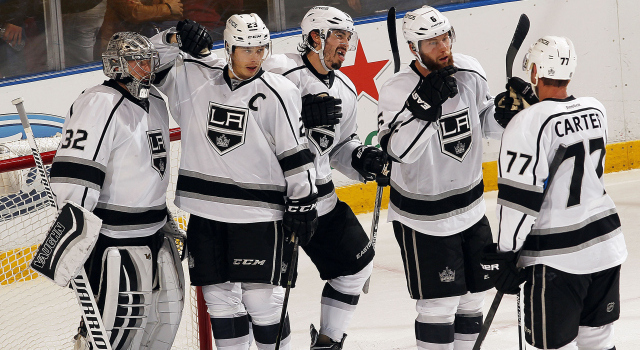 A 3-5-1 record on the second half of back-to-back games did not help the playoff cause, a notion firmly punctuated by a low-energy, 4-2 defeat to the Edmonton Oilers in the 80th game of the season that produced the unmistakable opening rings of the season’s death knell. The Kings had played the previous night in Vancouver.

With last season’s challenges in mind, it’s remarkable that this year the club has claimed 15 of a possible 16 points on the second nights of back-to-back sets this season. Though the Kings are 4-4-0 on the first night of back-to-backs, they climbed to 7-0-1 on latter nights with a 3-2, come-from-behind victory over the San Jose Sharks as the tail end of a six-games-in-nine-nights stretch.

“I think it was a big game just for a lot of other reason other than the fact that it was a six-in-nine,” defenseman Alec Martinez said. “You can look at the schedule, but like I said, you can’t make excuses for that. Every team is going to go through stretches like that, multiple stretches throughout the year. It was obviously a real good win for us, but I’d say more so just against a big rival and a big divisional opponent.”

The win was strengthened by a standout night in net by Jhonas Enroth, who defeated the Sharks on the road for the second time this season. But Jonathan Quick has been a helpful presence during the second night of back-to-back situations, posting a 4-0-0 record with a 1.50 goals-against average and .956 save percentage in the second game in which he starts on consecutive days.

There’s no real formula, in his estimation, that helps spur strong results in back-to-back situations.

“I don’t think there’s anything in particular,” Quick said. “You just kind of prepare for every game the same way you did the last one. I think we’ve had a few situations where our back-to-backs were short travel, so it wasn’t to tough on the body, as opposed to changing time zones or something like that, so maybe that has an effect. But I can’t think of anything – me or the team – is doing differently to prepare for back-to-back situations.”

Jonathan Quick, on -to-backs being overstated unless the team changes time zones:
Exactly. We had one a couple weeks ago where we played at home, Ottawa, and then Anaheim. By the time you wake up for the game in the morning on that Sunday, you don’t feel like you played the night before. There’s no travel. Saturday was an afternoon game, so you had plenty of time to do whatever you needed to do to get your body ready for the next day.

Quick, on any change in his routine on nights in which he knows he’s not starting:
No … Maybe you’ll eat a little bit less at lunch or something. But you’ll keep pretty much a similar routine.

Alec Martinez, on the team’s success in back-to-back games this season:
I think that’s definitely something we take a focus on at the beginning of the year. I think you roughly have 14 or 15 back-to-backs in a schedule, and those are big games. You can’t use those as an excuse because everyone’s going through it. I think that’s just something that we try to take a focus on, and I think that second night you’ve got to be extra diligent in your preparation, especially the mental part of it. The physical part of it is always going to be there, playing the night before and often times traveling because often times our back-to-backs are on the road. Like I said, it’s a focus that we’ve taken. We’ve just got to keep it going.