The Kings’ faceoff rates have fallen. Is that important? 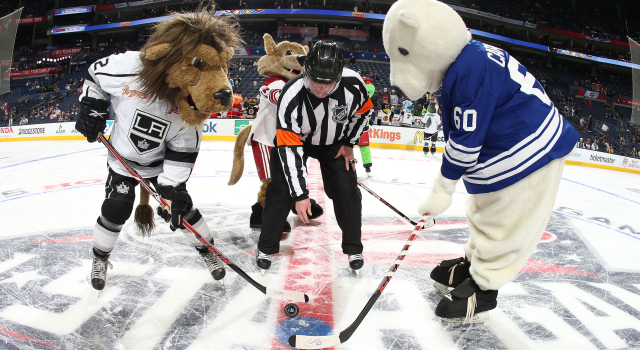 A team that has relied on an excellent possession game for virtually the entirety of this decade, the Kings had also maintained extremely strong faceoff rates, ranking tied for fourth in the league with a 51.5% rate from 2009-15. Los Angeles, though, dropped to 11th in the league last season, and entering tonight’s game ranks 20th despite having maintained the league’s top possession metrics.

With tonight’s opponent, the Arizona Coyotes, leading the league with a 53.8% success rate at the dot but ranking 26th in five-on-five Corsi-for, it triggers the question: How important are faceoffs towards the implementation of a strong possession game?

The answer, drawn from data, is “they are somewhat important,” but the correlation towards winning faceoffs and driving possession is probably a bit overstated. There are those who explain this using data here, here, here, here and here.

“I think it’s important,” Darryl Sutter said earlier today. “The key in it is to be dominant through your lineup, and if you have one or two guys, it’s hard on the road to get that guy out a lot because of icings and things like that, but when you have three guys, for sure, or maybe four, it makes a big difference, and even more important in our division, when you look at it.”

He’s partly referring to both the San Jose Sharks, whose 52.6% faceoff rate since 2005-06 leads the league – and who have remained an upper-echelon possession team – and the Coyotes, who in recent years have posted excellent numbers at the dot and rely on top faceoff artists Boyd Gordon and Antoine Vermette.

“He’s really strong,” Vincent Lecavalier said of Vermette. “I think him and Beregeron in Boston, they’re a little bit of the same. They’re really low and they’re really strong on their stick, they try to take over the circle, I guess, and I think that’s what makes them effective.”

Is the importance of faceoffs overlooked? Are they overstated? Understated?

“I think every team is pretty serious about it, people realize it can make a big difference at the end of the game, you know,” Lecavalier said. “At the end of a game, if you’re up one goal and you’re in the defensive zone, I mean obviously those are really important, same thing if it’s the other way around, offensively, there’s always some big draws that you need to win, but I don’t think it’s overlooked now, I think teams are on it, and I think there are a lot of good centermen out there that are good on draws, so you’ve got to bear down.”

Vincent Lecavalier, on whether there’s a correlation between winning faceoffs and possession:
100 percent, I mean if you start with it, it’s a big difference, if you lose all of your faceoffs and there’s 10-15 times during the game where you start without it, then you’re chasing around a little bit more, so yeah, I think every team focuses a little bit more on that, and that’s what’s important.

Lecavalier, on whether the new rule in which the defender must put his stick on the ice first has made an impact this season:
Oh yeah, it’s a big difference. You’re in the defensive zone, you have to go down first. It’s definitely a disadvantage, but you have to find a way to battle through that. Also, if you’re in the right circle, left circle, it’s a difference as well, so you’ve got to bear down and try and get that win.

Lecavalier, on whether linesmen are being more communicative in the faceoff circles:
I think they really emphasized on it from the new rule, so I think they really want that first guy to come in, that defensive guy, and come in and stop. You try to get a little bit of momentum, try to take the line as far as you can without getting kicked out, but the linesman are doing a really good job of making that defensive guy stop, but you’re definitely at a disadvantage when you’re standing still and not moving your blade.