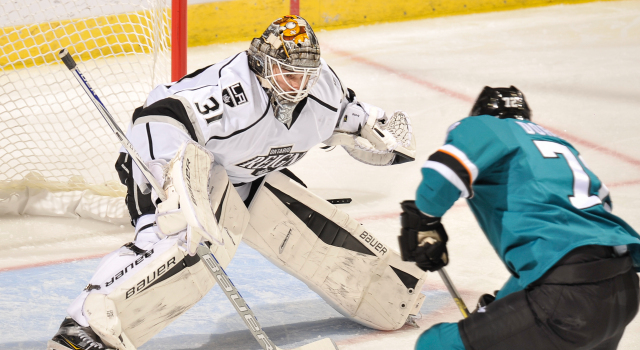 Reign game breakdown
The Reign won their fourth straight and finished up a home-and-home sweep of the Barracuda, holding on for a 2-1 win on Saturday night at SAP Center. A day removed from a 3-2 comeback/OT win, the Reign (24-10-2-1) had a better start in this one. Defenseman Kurtis MacDermid opened the scoring at the 12:31 mark of the first period on shot from the left point. MacDermid was welcomed back to the lineup and skated alongside his old partner Vincent LoVerde after missing 12 games due to suspension. San Jose tied things up at the 16:52 mark of the opening frame on a goal by Trevor Parkes in which the forward made a move around LoVerde and then beat Reign goalie Peter Budaj five hole. All the scoring occurred in the first period, and a driving Sean Backman put Ontario up 2-1 with 49 seconds left in the period after a cross feed from left winger Michael Mersch. The Reign killed off two MacDermid penalties in the second, finishing a perfect 3-for-3 on the PK and then dominated the third, outshooting the Barracuda 10-2. Nic Dowd assisted on both Reign goals and Budaj stopped 18 shots for his 22nd win, besting counterpart Troy Grosenick, who made 23 saves as San Jose (18-12-5-3) lost its fourth straight for the first time this season. San Jose coach Roy Sommer’s date with history will have to wait, as Mike Stothers’ group stopped him twice this weekend in his pursuit of win No. 636 for the AHL wins record as a head coach. Stothers had said Thursday, “I hope he gets it, but I hope it’s not against us.”

Three stars
–Kurtis MacDermid – The rookie defenseman was back after missing 12 games and nearly a month of game time while serving a 12-game suspension for a check to the head on the Gulls’ Matt Bailey back on Dec. 26, 2015. The Reign had not scored the first goal in a game in their last four and Stothers and the players alike were stressing having better starts and MacDermid’s goal gave them that. Although he took two penalties in the second, one being for an elbow on an open-ice hit on Parkes, the 6-foot-5 blue liner played “pretty good,” and “simple,” according to Stothers. The goal was his third of the season.
–Sean Backman – The right winger had a two-goal weekend as he was credited with the GWG in this one after netting a crucial tying goal on Friday’s contest in Ontario. While the Kings’ top prospects like Mersch, Dowd and Adrian Kempe get a lot of attention, it must be noted that Backman is tied for the team lead in points (31) with Dowd. Saturday, Backman finished a great pass from Mersch while both players were flying into the Barracuda zone on their respective wings for his 10th goal of the season.
–Nic Dowd – The center assisted on both Reign goals, stretching his point streak to six games. The St. Cloud State product has 14 points in his last nine, six of those being goals. Being reunited with Mersch is paying dividends and the move of Backman to their right side is as well. He factored in on three of the five Reign goals on the weekend.

Turning point
The Reign were finally able to put together a good start to a game, especially after failing to show up through the first two periods on Friday and rallying in dramatic fashion to win in OT. MacDermid’s goal hit two areas where the team had said in postgame interviews on Friday that it wanted to be better — starting games and getting shots through from the point.

Stat fact
–10 – When Mersch was called up to the Kings on Dec. 9 of last year, he left with a team-leading 12 goals. He scored his 10th on Nov. 27 against San Diego. So, finally on Saturday night Backman gave Mersch a little company in the double-digit goals column, netting his 10th almost two months after Mersch got his.

This and that off-ice
Defenseman Derek Forbort was scratched and following the game Stothers said he had a lower-body injury. It was Forbort’s first time out of the lineup since he was sent down by the Kings on Jan. 6. … The Reign took a rare plane flight up to San Jose on Saturday morning and will stay the night there before coming back Sunday. Fortunately, no weather issues in California to speak of.

Next up
The Reign on the road next week, starting with a trip to Stockton on Wednesday at 7 p.m. Ontario is 4-1 against the Flames affiliate this season and last beat the Heat in a 6-1 rout on Jan. 8. That was Adrian Kempe’s first game back from World Juniors.