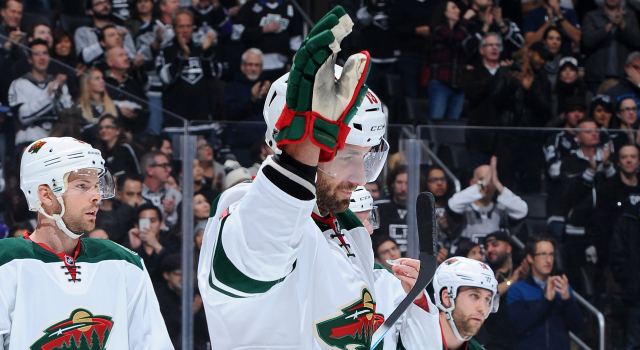 Jarret Stoll, on his tenure with Minnesota:
Yeah, I think it’s a really good fit. It’s obviously a Western Conference team that plays tight and has some skill, quickness, it’s a good role. From day one coming here, they explained it to me pretty straight-forward. It’s nice to be wanted and a role for you on the team, and yeah, I’m just trying to take advantage of it.

Stoll, on what was going through his mind during the tribute video:
It was great, it was awesome, obviously chills everywhere throughout your body and I wanted it to end as quickly as possible. I didn’t want to get – I would’ve got emotional or started to maybe, but just looked at Lewie in the faceoff and said, ‘let’s go’.

Stoll, on memories of playing in Los Angeles and whether he has seen former teammates:
Yeah, everybody. I’ve seen some guys the other night and tonight I’ll see some more guys, just chatting, you know, for a bit. We’re staying the night so it’s a chance to catch up with some guys, but yeah, just a lot of friends obviously, everybody with the team, with the organization, people that work in the office, everybody. It’s good to see faces, its been a while, so it’s always nice.

Stoll, on what’s made the difference to fit in with Minnesota:
Just having my role, I know what that is and the coaching staff here knows what that is. Getting a chance to play, it energizes you, you get that focus and you know what you’ve got to do, and I’m not asked to do anything above what I can do, I just do what I can to try and help the team win. Tonight was a great win, a full team effort tonight, it was just a clinic basically.