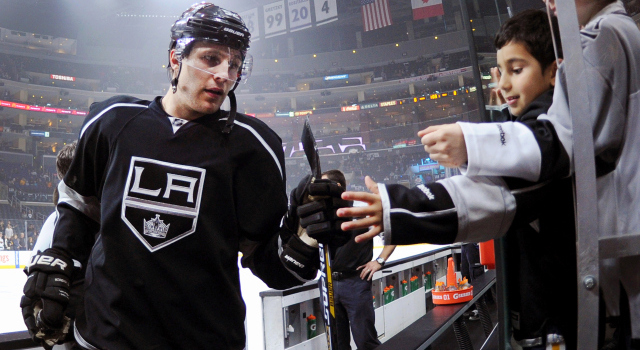 Vincent Lecavalier, on the Kings’ challenges in the second period:
Yeah, we didn’t play a really good game. They were skating pretty well that second period. They got that momentum and they got that goal in the last minute, the last seconds, so it was a tough one. But you’ve got to rebound back. We’ve got to make sure we’re ready for the next game.

Lecavalier, on whether he thought the second period replay would favor the Kings:
It was pretty close, but I think he tapped it to himself over the line. I’m not sure. It looked pretty close. I’m sure they made the right decision.

Lecavalier, on the struggle to create offense:
We didn’t get the puck enough to their net probably, and ourselves going through the perimeter enough. I’ve only been here – my seventh game – but what I know is when we score some big goals is when we go through that perimeter, and we probably didn’t do that enough tonight. We made some good saves, but we could’ve done more. We had some good chances in the first period, we just couldn’t bury ‘em. That could’ve changed the game as well.

Lecavalier, on the mindset going up against a team that doesn’t take many penalties:
Five-on-five, you’ve got to make sure you’re ready to go. We didn’t get any power plays. We got one, I think, in the third period. I think five-on-five, we needed to get that first goal and we didn’t. Like I said, when they got that second one at the end of the second period, that was definitely a tough one. We tried to come back. It probably wasn’t our best game, but like I said, we’ve got to rebound and come back the next game and play the way we know how to play.

Luke Schenn, on the team’s effort:
It wasn’t good enough. We were a little bit slow right from the get go, and we spent time in our own end tonight, and when you do that, you’re not going to obviously create enough chances if you’re in your own end. If it wasn’t for Quickie tonight, it probably could’ve been a lot worse. I don’t think we should be happy at all with that effort. We’ve got to turn the page quick, and we’ve got two huge division games coming up this weekend.

Schenn, on the second period struggles:
I think right from start to finish, I don’t think we were very happy with our effort at all. Like I said, we were a little bit flat, on our heels a little bit, and chasing the game a little bit too much, not solid enough in our defensive zone and closing in on guys and making them turn the puck over. I don’t think we created enough opportunities. Because of that, a lot of our shots tonight were perimeter, and you’re not going to score goals when you get shots like that from outside.