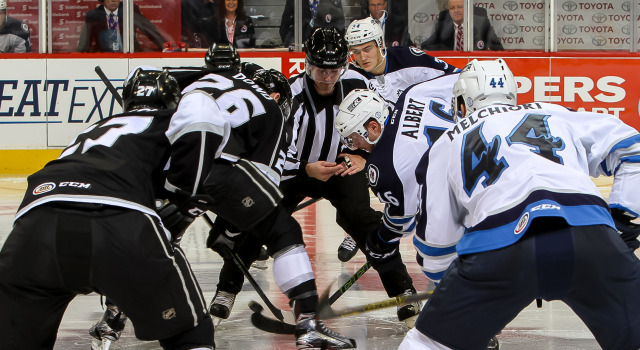 Reign game breakdown
Michael Mersch had a goal and an assist for his biggest offensive output since returning to the Reign and Ontario grinded down visiting Manitoba in a 4-1 win on Wednesday night. After Manitoba went up 1-0 at 6:37 of the first, Valentin Zykov scored from the high slot to tie the game at 16:04 on a power play goal off a setup pass from Mersch. From there, it was all Ontario in the second, a period in which they threw 13 shots on Moose goalie Eric Comrie. It was only a matter of time that Reign would break through and they did so on a rare slap shot goal by Mersch from the left point at 16:01. Mersch’s goal was followed 58 seconds by another from Ryan Horvat, who tipped a Derek Forbort point shot by Comrie. The Reign were also able to get behind the Moose defensemen multiple times as breakaways seemed to be a common occurrence. Justin Auger was even hauled down on one in the first, resulting in a penalty shot which he missed. The Reign’s fourth goal was an empty-netter by Sean Backman with 1:25 to go to put the game completely out of reach (if it wasn’t already) and the Reign improved to 22-10-2-1 while a struggling Manitoba squad fell to 11-22-2-3.

Best quote
Mersch, on the last time he remembered scoring from that far out: “That’s funny. I don’t know. Maybe an empty-netter or something?”

Three stars
–Michael Mersch – Mersch has been slotted on the left with Nic Dowd and Sean Backman and the comfort level seemed to reach new heights as he scored for the first time since his return to Ontario for his team-leading 13th goal of the season — on a very rare point shot, no less. Mersch’s slapper stood as the game-winner and he also factored in on Zykov’s goal, finding the rookie forward racing to the slot with a pass from behind the net. Mersch continues to be the only Reign player in double digits in the goals column.
–Ryan Horvat – It had been since a Dec. 6, 2015, game in Charlotte that the fourth-line center had found the back of the net. But here, he provided important secondary scoring and kept the Reign’s momentum going in the second period. Ironically, Horvat said after the game that head coach Mike Stothers was talking on the bench about heading into the third with the lead it and then the goals came in shortly after.
–Valentin Zykov – It had been a long time in the scoring department for Zykov as well, who scored for the first time in 13 games. Mersch had no choice but to hit the wide-open rookie as he barreled into the slot for the game’s first goal. It was also a power-play goal, an area in which the Reign have had more struggles than successes as of late.

Turning point
–A 58-second stretch was what the Reign were waiting for in the second period. Ontario was pressing throughout the middle frame but couldn’t get anything by Comrie until Mersch’s goal. Then, 58 seconds later Horvat put the Reign up 3-1 on his deflection. With the way the game was going it really seemed only a matter of time before the Reign broke through and took the lead. When they finally did, the damage was too much for the Moose to overcome against a deeper team with Peter Budaj in net.

Stat fact
–200 – Budaj registered his 200th pro win, combining victories from the AHL and NHL level. He stopped 23 shots and the only goal he allowed was the result of a Reign miscue coming from behind the net in their own zone.

This and that off-ice
AHL President/CEO David Andrews was in the house to take in the game as part of his tour through a few AHL cities. He said he’s been pleased with the response by fans in California, adding, “There’s certainly a belief that we’re going to grow the game in California by having the American League here.” More to come on ORI on Thursday on what else he said about the league’s shift to the West Coast. … Reign defenseman Kurtis MacDermid served his 11th game of his 12-game suspension for a check to the head on the Gulls’ Matt Bailey way back on Dec. 26, 2015. He’s eligible to return on Saturday at San Jose.

Next up
The Reign will host the front end of a home-and-home against San Jose on Friday night at 7 p.m. San Jose head coach Roy Sommer will have the chance to break the AHL wins record for a head coach while going against good friend in Stothers. Sommer will be looking for win No. 636, which would tie him with Fred “Bun” Cook.