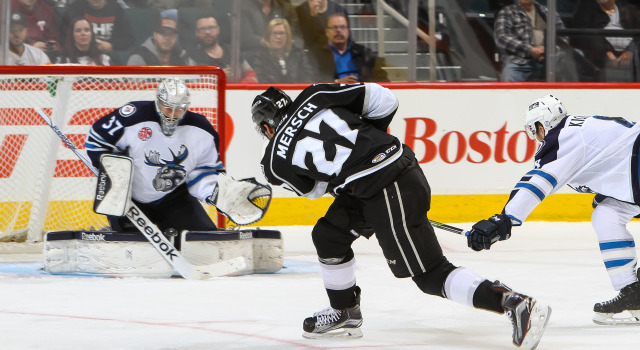 Head coach Mike Stothers, on secondary scoring and Mersch:
It sure was nice to see Z get on the board. I think it had been one goal in close to 30 games. … It had been way too long so it was good to see him get on the board. Bronco (Horvat) got a nice goal, kind of the ugly way but that’s fine, that’s good. It was nice to see Big Mike got a few points for us tonight, which is great. Actually, that was the first time I’ve ever seen Mike score on a slap shot. And that’s the first time I’ve seen him score from that far out. Who knows, maybe that’s a sign of things to come.

Stothers, on if this was Mersch’s best game since returning to the Reign:
You can’t ask me that question because I think every game Merschy plays is a great game. He was good, but I thought everybody was good. Dowder made some, holy smokes, he made some plays. Backs just flies. It’s a fun line to watch. They complement each other well. … Everybody was good. Outside of the start where we were killing penalties, 4 on 3 and stuff like that, once we got through that we got a few bumps in, I think kind of got our team going. Kind of got our skating going, which makes a difference.

Stothers, on Zykov’s early roughing penalty possibly setting the tone for him:
That’s a big part of his game. He’s a big, strong guy. I think him winning puck battles and knocking guys off of pucks. I think that’s a big part of it. I’m not sure what happened there, I didn’t know what they were doing. I didn’t know if they were going to fight or, I didn’t know what was happening. It ends up they both go off. Kichton, it’s not like he’s a guy who looks for that kind of trouble and Z doesn’t either so it was kind of unique. But maybe it set the tone for Z. He did seem to be a little bit more physical tonight. He seemed to be a little bit more of a presence on the ice. He seemed to be noticeable on the ice which I think is great for him. He can make plays, he’s a strong skater and he should be playing a hard, heavy game each and every night. That’s when he’ll get more opportunities.

Stothers, on what he said to the players after the first period:
Well, first of all, on the bench I told Backs I’m not even coming in. I do that sometimes. They knew that I couldn’t keep my mouth shut for that long so I did come in and they all started laughing, like, ‘OK, here comes Stutts.’ I just said to them I thought we were trying to fine-tune our advancing the puck or putting it by their defensemen. I think they were worried about letting their goalie come out and handle it. I just said to them let’s not worry about their goalie handling it, he’s not a real strong puckhandler so let’s just make sure we get it in. Get in and get the forecheck going, much the same as we did the other night against Texas. Once we decided to finally get it in and make them go 200 feet the game changed. We were a little bit more physical and I think that’s good. It’s really tough when teams are constantly retreating to go back and get pucks and have to work 200 feet to get to your end. That was the message. I told the defensemen we needed to move the puck quicker. I thought we held onto it a little too long. So, but sometimes you say things and it doesn’t mean a hill of beans because they just come out and do the same thing all over again. Sometimes I feel like I’m just talking to myself. You know what, it’s a good bunch of guys. There’s a few times you go in there, you light a fire. There’s sometimes you go in there with some humor. There’s sometimes, like I said, I don’t even go in at all, it was good period or you guys, it’s your room, you guys do it. I don’t know if that’s right or wrong but that’s the way we roll.

Michael Mersch, on overall thoughts of the game:
I thought it was great to have all four lines going tonight. Staying out of the box … we got all four lines rolling and it allowed us to keep everybody fresh on the bench. Horvat had a great goal going to the net and Paul had a good screen in front. When you have everybody contributing and scoring goals you tend to win games.

Mersch, on when the last time it was that he scored a goal that far out:
That’s funny. I don’t know. Maybe an empty-netter or something? Just saw their defenseman screening in front and Army made a good pass and I was able to put it in.

Mersch, on clamping down with the lead:
I thought we had a lot of pressure in them in the first and second period, maybe wore them down a little bit, we did smart things with the puck. Then we were able to play smart defensively late in the third when we needed to. Everybody did a good job tonight.

Mersch, on if this was his best game since returning to Ontario:
Yeah, just putting the pieces together and everybody clicking on the same page. It’s nice having Backs on the right with a lot of speed because it forces me to play with a lot of speed too and get up ice. He’s a great player and helps out tremendously and Dowder’s great down the middle too. So, when you have that type of stuff and everything’s clicking and you get a few games to feel each other out and have the same tendencies it works out.

Ryan Horvat, on scoring for the first time in a while:
It’s been a little bit of time but I think just keep sticking to our guns, play a hard game going to the net. Obviously just keep your stick on the ice and good things will happen. [Reporter: What did you see on that big wind up from Forbort?] Yeah, just trying to get in front, I was battling with the defenseman in the corner there so just trying to get good net front position on the goalie. He made a good play to get it on my stick there.

Horvat, on the two goals in 58 seconds:
It was funny, before the first line, Merschy’s line went out Stuttsy said, ‘let’s try to go into the third with a lead here.’ So, I don’t know if that kind of helped things but it’s definitely nice to go into the third period with the lead there, especially with a team that’s been on the road for a while. Just keep working them.

Justin Auger, on the penalty shot and the last time he took one:
Yeah, I can’t remember ever taking a penalty (shot). I think took one shootout in junior, so that tells ya how much I get put out there for shootouts. I was confident going in. We do it a lot in practice and I was bearing down. I even, before I took the shot, I skated by Budes and asked him what he thought I should do. He told me to shoot and I went down and he’s a big guy, he took a lot of the net away. Never saw a shot and tried to get him moving down low but he read my play. It happens, just got to come back and try something different the next time.

Sean Backman, on the game overall:
We capitalized early there on the power play, which is nice, and then two quick ones before the period ends there and kind of played steady hockey from there.

Backman, on playing with Dowd and Mersch:
It’s great. Actually that line played a lot together last year, me, Dowd and Mersch. We’re comfortable. We know each others’ tendencies and whatnot. Right now we’re really enjoying each other. [Reporter: Any specific things about their game that makes things easier?] Well, Merschy is a heavy guy down low and he’s tough to knock off the puck and I know when he has the puck it’s going to the net. A guy like Dowd is a steady centerman who makes plays and can score too. Both are tremendous players.