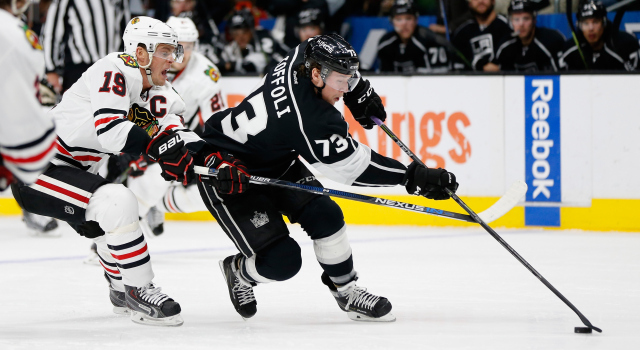 Toffoli, who scored 11 shorthanded goals with the Ottawa 67’s between 2010 and 2012 – “I think I just played in those situations and got the chances, and when I got the chances I scored,” he said – added three more in 58 games with the Manchester Monarchs and now has six in 193 NHL games for a total of 20 in the last five and a half season. (He has one this season.)

Tied for sixth in the league with 22 goals with Joe Pavelski and Matt Duchene, Toffoli’s performance has benefited as improved conditioning and game preparation have accentuated the finer aspects of a complete, 200-foot game. 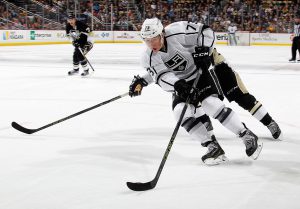 “He was that last year too before he got sick and his game dropped off and it was hard to get his energy back,” Darryl Sutter said. “But I’d say the biggest difference in Tyler’s development is just his training. His skill set hasn’t changed, he’s better trained, so he’s a stronger player and he’s probably a little step quicker in situations that only we would recognize or if he’s fighting somebody off or putting somebody on his back or getting inside on a defenseman – things like that.”

Hence, the spike in even strength and power play goals and the lengthy list of other ways he has managed to find the back of the net.

“It doesn’t happen by accident, or ‘he was lucky.’ That doesn’t happen in our game now,” Sutter said. “There’s very little luck involved because of the evenness of it all. They say the ‘parity in teams,’ well, there’s parity in who you play against, too. I’m able to for the most part play him more because of that. If you could see the biggest difference in his game in the last few years, it’s who he’s on the ice against and situations he’s used in.”

Toffoli has gradually seen more difficult competition and has thrived as his minutes have increased by over three full minutes to an average of 17:42 per game. His next goal will tie his career-high, and the traditionally strong possession-driver’s ability to generate five-on-five offense spikes up from a team that has itself experienced an appreciation of its offensive output.

But Toffoli’s defensive game, which was already plenty passable at the OHL level, still needed improvement upon his graduation to the professional game for his skill set to work in concert with Los Angeles’ style of play.

“Once I got drafted, Dean (Lombardi) and Futes (Mike Futa) got on me real quick,” Toffoli said. “They helped me, just coming to camps in LA really made me … [know] I had to get better defensively to be able to make the Kings, and I’ve come a long way from then.”

Plus-minus isn’t necessary the most telling statistic, but it does serve a useful purpose, according to Sutter, so when looking at Toffoli’s NHL-leading plus-28 rating that includes a streak of 30 consecutive games in which he’s posted an even or better rating, there’s some link between his and the team’s ability to own the puck and put it in the back of the opponents’ net.

“You know, everybody says, ‘well, that’s not a real stat.’ It’s a real stat. For sure it is,” Sutter said. “If you look at a team like ours, when you’re always good in goals for and against differential and you do that mostly five-on-five… it’s a pretty telling stat. So if you’ve got guys on the right side of the ledger that are high and guys that aren’t, there’s a difference in what you’re getting out of those players in terms of quality when you have the puck or the other team has it, for sure.”

Being coachable helps, too.

“[Defensive play] was something that he needed to learn and was very willing to learn,” Vice President of Hockey Operations and Director of Player Personnel Michael Futa said of Toffoli, a plus-77 in 193 career NHL games.

“It’s like we said with all of our guys, you can’t be one-dimensional. Not only was his conditioning something that he had to work on, which he knew, but he had to learn how to play away from the puck. But he’s a smart enough kid and he understood you’ve got to be accountable, because if you’re not scoring goals then you’ve got to be honest in your own zone, and that’s something that wouldn’t be acceptable under Darryl.”