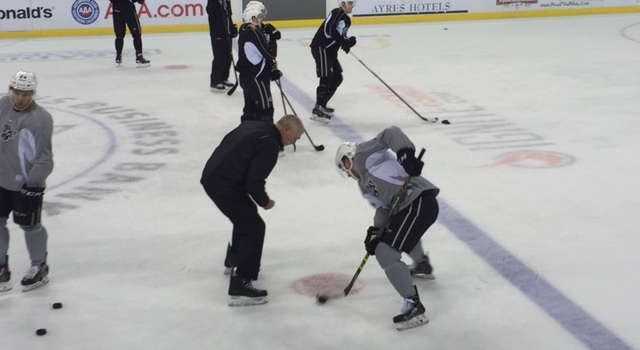 Some notes from today’s 10 a.m. morning skate at Citizens Business Bank Arena before the Reign take on Manitoba tonight at 7 p.m.

–The Reign played a three-in-three at home last weekend: 5-0 win Friday vs. San Diego, 4-2 loss Saturday vs. Bakersfield, 2-1 win Sunday vs. Texas. With that being said, recovery was important this week. “It’s a little tough on your body,” Michael Mersch said on Wednesday. “Monday’s obviously a huge recovery day so you’ve got to make sure you take care of yourself. Then come back Tuesday get a good skate in, get a good practice, kind of flush the legs out a little bit and get them going. It was pretty good so we’re feeling ready to go today.” Adrian Kempe said soreness hits a bit in the Sunday game and that the three-in-three “is always tough,” but he’s happy to get back into a game right away tonight. The impact of the long weekend stretches to the coaches as well. “We had good recovery day on Monday and Tuesday was what you would expect, a little bit sloppy to start practice but I thought they finished well,” head coach Mike Stothers said. “That’s a tough weekend. Even as a coach you wake up Monday morning and you’re like, ‘holy smokes,’ feels like you’ve been hit by a truck. I didn’t even play. It takes a toll on ya, those are hard weekends and thankfully they’re over with.”

–Stothers said “as of right now” we can expect Mersch skating on the left again with Nic Dowd and Sean Backman. This will be Mersch’s fourth game with the Reign since being sent down by the Kings, but he’s been keeping an eye on the Kings, who beat the Stars 3-2 on Tuesday night. “Like watching hockey in general so that game last night was a pretty good game, a lot of good opportunities and fast hockey, so it’s always fun to watch,” Mersch said. “Of course I’m supporting them. Playing with those guys, you always want to see them do well so it was great to see them win last night.” Mersch played in 15 games during his call-up with L.A. and now is resigned to watching the parent club on TV, and that’s not necessarily a bad thing in his opinion. “Maybe it’s good to watch a few games on TV and just in general, kind of pick up on a few things you weren’t picking up while you were playing because you were so focused and dialed in on the game,” Mersch said.

–Center Kris Newbury skated on Tuesday for the first time since suffering what Stothers has called a “mid-range” injury. On Wednesday he donned red at morning skate and won’t be in the lineup tonight. “I feel good,” Newbury said. “Obviously it’s going to take a little bit more time to get the lungs back but there’s no pain with skating so that’s a good sign.” Stothers agreed when I asked if it would be highly unlikely that we see the veteran dressed for a game this week and instead opted to say he was “optimistic for next week.” It’s a bit of a slippery slope, as Newbury has missed now eight games with this injury after missing 12 games earlier in the season with a broken foot. “He was out there in red again today, which is better than where we were,” Stothers said. “I think he’s a little ahead of schedule. It’s one of those things that you’ve got to be very careful that you don’t want to rush and have them do too much, overexert. But yet you’re still worrying about him getting his conditioning back or some of it back. These guys, when they get hurt, they can tolerate it for a game or two, but when you miss the amount of time he has — twice now — you’ve got to be careful that you’re getting the honest truth on how good they feel because they want to get back in the lineup so bad, they’re not always as forthright and truthful as you need them to be. We’ll be sure that if and when he’s back, hopefully it’s for the remainder of the season because he’s missed far too much.”

–Goalie Peter Budaj was first off the ice and is expected to make his 31st start (out of the team’s 35 games this season). Budaj was rested last Sunday against Texas after making 19 consecutive starts.

–Defenseman Nick Ebert (upper-body injury) is still not skating and Stothers said it’s something they have to continue to wait out. He’ll miss his sixth straight game tonight.

–“He’s in black today,” Stothers said after practice regarding Alex Lintuniemi. The defensive prospect has been with the Reign while rehabbing back from wrist surgery in early December. Lintuniemi’s been in a red/caution sweater, so this move to black marks progress. “He’s doing pretty well,” Stothers said. “Whether or not he stays with us or he goes back to Manchester to kind of get back into game shape, I don’t know, I’ll wait to see what Blakey has to say about that and what they want him to do. But he’s here, he’s close, so that’s encouraging.”

–It’s been quite some time since the Reign have faced Manitoba. You have to go back to October and the Reign’s second and third games of the AHL season (4-1 W, 1-0 W in OT). “Well, we want to build off of Friday night’s game and Sunday afternoon’s game and leave Saturday night right where it belongs,” Stothers said. “We saw them a long time ago. Their lineup’s changed, they have a few guys either up or injured but they’re playing well, they’re playing hard. It seems like everybody comes in here pumped up to play us, so we’ve got to be ready.”