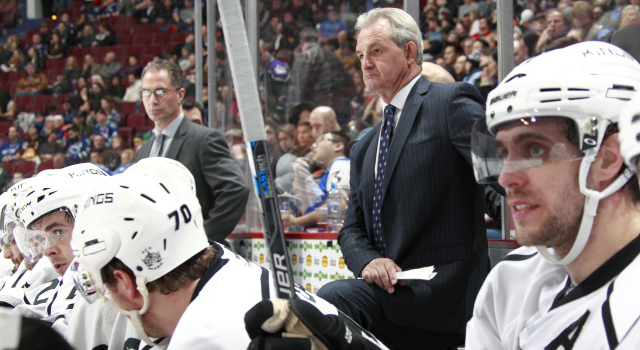 Good morning from El Segundo, where the Kings are in the process of taking the ice for the morning skate in advance of tonight’s game against Dallas (7:30 p.m. / FOX Sports West / KABC / I Heart Radio). Before we get to the skate notes in a little bit, here are a few Kings-related reports from Elliotte Friedman in today’s 30 Thoughts column.

From 30 Thoughts, at Sportsnet.ca:

11. You might have heard Mike Babcock got a massive contract in the summer, which benefitted Joel Quenneville. Chicago’s coach landed a big extension last week, in the $6M range per season, according to Nick Kypreos. Who is next? Likely Darryl Sutter, the only bench boss besides Quenneville to win a Stanley Cup the past five seasons. His deal expires after this season.

“No doubt I’ll get something done here,” he said Monday. “We’ve talked a little, but they’ve been focussed on (Anze) Kopitar.”

No chance of retiring?

“Oh no, I’ll be coaching here next year.”

12. When Los Angeles traded for Marian Gaborik, Sutter used the 2014 Olympic break to watch video of the winger to judge the fit. He did something similar with Vincent Lecavalier, studying the last three games the newest King played with the Flyers.

But what really stood out were the morning skates the two times LA and Philadelphia met this season. Lecavalier did not play in either, but “he was working his ass off to stay in the league,” Sutter said. “It reminds me of bringing Denis Savard back to Chicago (in 1995). He was a depth guy, but he was great around the team and embraced it. The only thing I told (Lecavalier) when he got here was, ‘Enjoy it, you have a chance to play until the middle of June in the last year of your career.’”

13. Sutter on his club, running away with the Pacific Division: “From a team standpoint, we’ve accomplished everything we’ve needed to. But, for individual numbers, we need more from some people.”

He was talking about the forwards, crediting Kopitar, Milan Lucic, Tyler Toffoli and Jeff Carter — although “he was banged up and is now getting going” — for carrying the load. He’s very happy to see Dwight King healthy, because it should stabilize the bottom two lines.

“But, from the rest of them, we could use 15 more goals. The benchmark is still the team defending the Stanley Cup.”

14. Finally, Sutter said Lucic, who the Kings will now try to re-sign, does not get enough credit for being “a student of the game.” Lucic’s made an impact on and off the ice. “He’s only been with us four or five months, and he’s got a strong identity in the room. We lost three or four guys, character guys. Mike Richards and Jarret Stoll, no matter what happened with them outside, they were strong guys. Robyn Regehr. Justin Williams. They took care of things. Milan has that.”