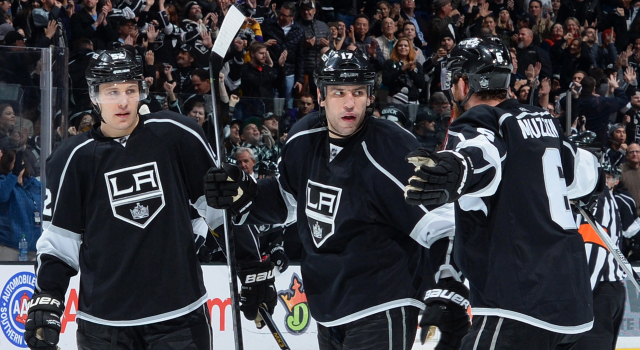 Milan Lucic, on the team’s puck movement to set up his game-winning goal:
It felt definitely like a five-man cycle. Everyone was touching the puck and moving it around. And right now, when we’re out there on the ice, we’re feeling pretty good and pretty confident and using each other in the right way. There was another example of it and it ends up turning into the game-winning goal.

Lucic, on Vincent Lecavalier scoring power play goals in three consecutive games:
I think a lot of people wondered what he was going to bring to this team. A lot of questions marks with him coming, but you can tell he’s having fun again. The coaches have put him in a position to succeed and obviously that’s something that he has earned. He’s been a great player for a long time in this league. For whatever reason, it wasn’t really going for him in Philadelphia but kind of gets rejuvenated here with that trade. He’s playing with some great players and making the most out of his time on the PP. He’s been great for us. Like you said, a good veteran presence coming in, a guy who has won a cup so he knows what it takes. We’re happy to have him.

Lucic, on how the team found their legs after a sluggish start to the game:
We just talked about getting the emotional level of our game up and like I talked about getting in on the forecheck and creating some zone time. It felt like it was kind of one-and-done or we weren’t getting to the puck. But I think once Carts was able to turn that puck over and create a rush and kind of create that penalty in the first period, things started to move into the direction as far as our game goes the way that we wanted to. A bit of slow start on our end and it’s going to happen at times and it’s just how you respond from that.

Jake Muzzin, on the victory:
Obviously very happy with it, that’s a good team over there [with] a lot of firepower, a lot of skilled guys. For the most part, we came out a little slow and kind of got our legs going. The PP was hot. We got another one and battled right to the end, so a good all-around game. Again, Quickie made some hell of a saves at the end there and we got the two points and that’s all that matters.

Muzzin, on the puck movement leading to the game-winning goal:
There were shots, rebounds, recoveries, passes and stuff like that. So nice to put one in midway through the third there and hang onto the lead.

Muzzin, on his eight-game scoring streak:
I’ll take it but it’s not like I’m going out there looking to get points. I want to contribute offensively when I can. Like I said the other night, it’s just about getting pucks to the net, tips, rebounds, those kinds of things where you’re picking up points. It’s just I think it’s more luck than anything right now. So I’ll take it though. [Reporter: You don’t think you’re doing anything better to produce something more?] Not really, it’s not like it’s in my mind that I’ve got to do something crazy here or keep this thing going. That’s not what I’m thinking about. I’m thinking about just getting pucks to the net and looking for finding the forwards and still just doing my thing. [Reporter: I didn’t mean anything like ordinary.] No and I’m not trying to do anything out of the ordinary. Like I said, just trying to create offense when I can and it goes from there.

Muzzin, on whether they played “Kings hockey” after the first period:
Obviously our start, you could tell, was not the start we were looking for – a little sluggish, a little slow in our zone, a little sloppy – and they capitalized on chances. But we came out of the period tied and we’ll take that and we got better at the start of the second. A big kill to start and then we went from there.

Muzzin, on defending a one-goal lead against Dallas’ aggressive offensive attack:
You’re on high alert. I mean there’s guys leaving the zone, there’s guys swinging low. You look at their lineup, they have so many high-end guys with a lot of goals so you have to be aware and then they get an extra attacker. You have to be on high alert and just do your job. You’ve got five guys out there doing their job. You have to do your job and maybe the odd time rely on Quickie to make a big save and most of the time he’s there to do it. So it’s what you’ve got to do. [Reporter: It’s seemed like pond hockey at times. Just when you watch that team play and not having faced them before…] They like the rush game. They like turnovers in the neutral zone and attacking from there. So there’s not a lot of low play and battles down low, but that’s what their good at. We played right into their hands early in the first. We turned over pucks in the neutral zone and they had odd-man rushes coming at us. So we learned from it and got better. We got the win and we’ll take it.