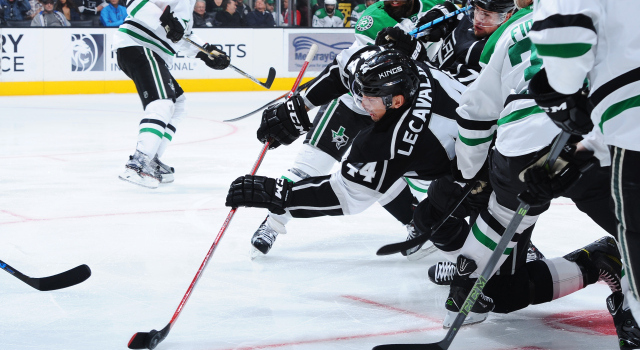 On the win over Dallas:
I think we found a way to win, and I thought it was through a lot of work and a lot of structure in our game. You’re coming off the Anaheim game where it’s a different type of team than you’re playing tonight, and to be able to adjust and play through it and win, it’s a good challenge for our team and it was a good character test for us.

On the team’s strategy to contain Dallas’ top line:
Try not to play on the wrong side of the puck. Try and make sure you’re on top of plays and try and manage the puck. They’re going to get their chances, and they had lots of ‘em tonight. If you look at it, we just finished playing Anaheim, and coming into that game they were the lowest scoring team. Then we play Dallas tonight, and they’re the highest scoring team. So the way we play, we have to play our style. Then we have a chance.

On rebounding after an early goal:
They’re going to score. If one goal is going to beat you – I mean, they scored a goal late. I’d say the bigger goal, if you weren’t a strong team, was the goal that tied it up. Nothing to do with first goals.

On how the team can improve:
We’ve got lots to improve on. [Reporter: Where?] I don’t have to tell you everything, do I? Aw, we’re not very good. I don’t think we’re good. We’re just kind of spinning our wheels.

On Vincent Lecavalier scoring again:
It’s a power play goal. We’ve seen lots of ‘em over the years from him from that spot. If you think of the power play goals he’s scored in the last two games, one’s a faceoff goal. The last game Marty and Jeff both make really good plays, and tonight, I think McBain makes a good [play]. But I’ve seen him take that shot lots over his career.