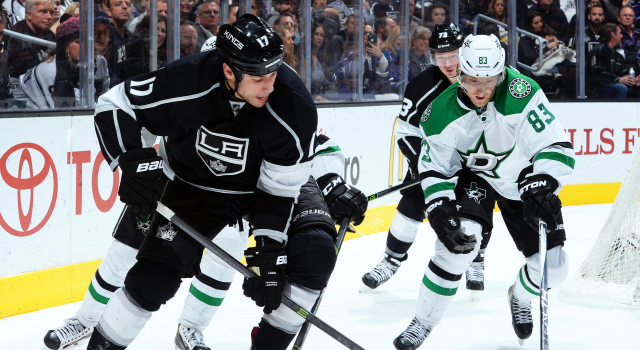 Head coach Lindy Ruff, on what needed to be better for the Stars:
Just our finish. We had some good opportunities, we had the breakaway at the end of the second, couple 2-on-1s we didn’t convert. I think if you play that hard, that was a hard game, I think you’ll win your share.

Ruff, on the start and the breakdown on the game-winner:
Yeah. I thought the Janmark line gave us a real good night. It was unfortunate that Roussel lost his stick and the shot went off, I think it went off Klingberg going wide. But, that’s the breaks when you throw pucks at the net.

Ruff, on goalie Kari Lehtonen’s play and missed opportunities:
He made some good saves for us. I haven’t looked at the game yet but both goalies had to make some big-time saves. I think we missed the mark. I think Eakin probably had the best chance where he had probably half a net that was open.

Ruff, on the Stars’ losing streak:
I think biggest thing is our big boys haven’t been converting. It’s tough on the rest of the lineup when they’re not on the scoresheet. When they’re on the scoresheet, we’re gonna win games. They’re having a little bit of a tough time right now. I thought there was opportunities there to finish, just didn’t quite get ‘er done.

Ruff, on the game overall:
We knew it was going to be a lower-chance type of game. We had some of the looks we wanted to get just, like I said, we didn’t finish.

Ales Hemsky, on the game overall:
Yeah, we knew it would be a tight game. We have to work hard to turn around this thing and I think we did a better job but we still have to play 60 minutes, battle hard, be comfortable playing those type of games. There will be tight games in the end, to the end, we won’t see too many open games and it will be tough to score goals. We just have to put everything on net and play better.

Hemsky, on Lucic’s game-winning goal:
I don’t even know what happened there … we just lost the coverage. I think Rous lost his stick and we didn’t know who was taking him. Unfortunately, you can’t give up those mistakes.

Alex Goligoski, on the Stars’ overall play:
It doesn’t feel great, but we’re trying to do the right things out there. We’re getting the looks that we’re trying to get. Our penalty kill’s killing us right now. It’s tough when games go that way. It was a tight game, I thought both teams played pretty well. Just keep going. We’ll get out of this thing if we keep playing that way.

Goligoski, on the third period and Lucic’s game-winner:
They’re grinding it down there, we just, sometimes you’ve got to stay disciplined and kind of weather the storm for a second. They got a high forward up there and he’s able to throw the shot through by 3-4 guys. Got to find ways to get in front of those pucks.

Goligoski, on if the Stars worry about the Blackhawks, Kings and their success:
You can’t worry too much about what other teams are doing. It’s not going to effect the way we play in here. We’ve got to figure out our stuff first. Those other teams are going to do what they’re going to do. It’s about us in here, finding ways to get points.

Goligoski, on the losing streak and if they’re running into hot goalies:
I don’t think so. Tonight we had some looks. We missed the net on a few and their goalie made some good saves, obviously. He’s a good goalie. I don’t think we’ve necessarily ran into any real hot goalies or anything. It’s more on us. It’s not like we’re getting games stolen from us.