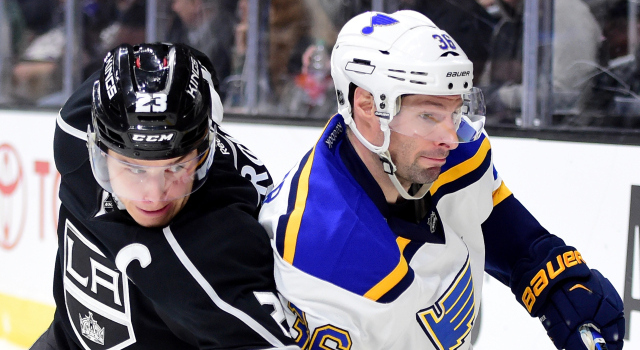 There are five forwards on this Los Angeles Kings team who average over a minute per game in both power play and shorthanded play this season: Anze Kopitar, Jeff Carter, Tyler Toffoli, Dustin Brown and Tanner Pearson.

Four of the five players have earned at least 20 points this season. And then there is Brown, the fifth, who has produced lukewarm numbers since potting 18 goals in 46 games in 2012-13. Through 44 games this season, Brown, who has played a team-best 139 consecutive games, has four goals and 14 points.

“Brownie is now where it’s about winning,” Darryl Sutter said. “He accepts his role … but he’s got to perform at a high level in that role. As I said, if you want it to last for a long time, then you’ve got to play really well in that role.”

That role has been to provide hard energy – “We need him in a real strong checking role and a physical role,” Sutter said – and he has mostly done so in his all-situational play. His five-on-five possession rates are the best they’ve ever been, and 2:55 of his 16:10 of ice time has been spent on special teams. The Kings rank sixth on the power play and 10th on the penalty kill.

Have those numbers been affected by evolving personnel, strategy or attitude?

“I think it’s probably all three,” Brown said. “I think our PK, we kind of go in spurts, or we’ll play really good for 1:55 and have a breakdown. I can’t recall which game it was, we killed a bunch of penalties, and there was maybe 30 seconds of PK where we were no good and we had two goals scored on us, that type of thing. And just bringing awareness to our power play, it’s just about momentum, you go out there and generate a lot of shots and get around the net and make it a challenging two minutes, and obviously you’re trying to score, but a lot of it’s about momentum. It’s the same thing going back to the PK, you look at the St. Louis game, we had to kill off a five-minute major in a pretty gritty game, it got us a point.”

As for his overall play, there was nuance to Brown’s summary. No, he’s not scoring at earlier rates in his career, which is influenced from a shooting percentage that reached 12.7% in 2012-13 before dropping steadily to this year’s 3.4%. He has one even strength goal.

But there are other ways he has helped his team win games, despite having hit a wall offensively with one five-on-five goal. Like Mike Richards, who had dealt with declining numbers during the latter half of his tenure in Los Angeles, Brown is accepting of any role that allows him to win games. The Kings lead the Pacific Division by 10 points in advance of tonight’s game against the Dallas Stars (7:30 p.m. / FOX Sports West / KABC 790 / I Heart Radio).

“I haven’t produced as much as I would have liked, but I think there’s other parts of my game that I’ve been really good – PK, the work aspect of that. We have a lot of guys that find ways to win games for us in different capacities, and I think that’s kind of what our team is about. You look at Ty, I mean he’s scored [22] goals, and that’s a big part of our team, and you look at Kopi and how he’s played, the last 15 games especially, those guys have carried us here as of late, but that’s not to say that our other lines haven’t done very good things. Again, we’re not in first place because of one or two guys, every player has a way to help each other and help the team win.”

At Tuesday’s morning skate Brown was aligned opposite Dwight King on Trevor Lewis’ line. Against Ottawa on Saturday he saw time on what would be considered the “fourth” line, though he remained an option on special teams and skated primarily with Vincent Lecavalier and Marian Gaborik in Anaheim on Sunday.

“I think I can be effective on any line, and that’s an advantage for me to have an impact whether I’m playing fourth line or second line, it doesn’t make a difference. At the end of the day, it’s just about finding a way to help a team win games and there’s a lot of different ways that you can do that.”

Dustin Brown, on the acquisition of Vincent Lecavalier and Luke Schenn:
Anytime you can get a big centerman like that, especially the way we play, it really helps the way we approach the game, and then you have Schenner, who’s a big defenseman that competes really hard, and that again, I think goes with what we’re all about. So, they fit in on the ice, and we’ve talked about this in years’ past, when we bring players in, it’s pretty easy to engulf them within the group because of how long this group has been together, and when we get new players, for the most part, it’s a pretty easy transition.

Brown, on whether he needs to take new players aside, give them a speech:
No, not at all. We’ve been very consistent in the way we do things, partly because we’ve been together for a long time, again, that goes a long way in introducing new players, we’ve done it before and it’s no different this time.