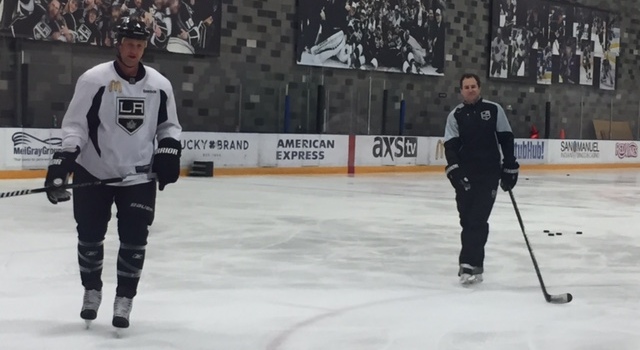 Good afternoon from El Segundo, where a good crowd had gathered to watch Kyle Clifford skate with Rob Blake and Nelson Emerson. Because he continues to skate on his own and has not yet returned to full team practices, there is no firm timetable yet on Clifford’s return.

As for Blake, the Hall of Fame defenseman has been spotted making the rounds on the Toyota Sports Center ice as he prepares for the Avalanche-Red Wings alumni game at Coors Field on February 26. As noted by the Denver Post, even Patrick Roy has “twice has donned the goalie skates and equipment and faced shots in beginning his preparation for the game.” Never mind the other Hall of Famers such as Roy, Ray Bourque, Joe Sakic and Peter Forsberg – both Claude Lemieux and Kris Draper are expected to represent their respective teams, which makes this alumni game more watchable than virtually any other.

The rest of the players met with coaches, received treatment, watched video and went home without taking the ice. For those who might be considering a jaunt down to El Segundo to watch the team train, it is strongly suggested that you consider attending practice a day immediately before a home day game, which are days in which the entire team will be on the ice and practices are generally lengthier.

Darryl Sutter, on the impetus of adjusting the team’s lines and pairings yesterday:
I don’t think we did that much. I mean, Kopi’s line stayed the same. When you’re playing a lot of games, you’re trying to just find little different things to keep the guys energized or to keep ‘em motivated or two or three guys that minutes changed because they weren’t deserving of more. Pretty clear. I mean, it’s not so much the opponent , it’s a back-to-back, and you’re trying to get a little bit more out of guys, and we wanted to get Andy back in. Hey, these guys that are going in and out of the lineup, we need ‘em to do something to not make it an easy decision. Take ‘em out, let em just do something to say, ‘Jeez, I’m in.’ That’s an ongoing thing, and that’s part of the competition of it. [Reporter: In terms of what you got yesterday, team-wide, you happy overall with the way the team came in there and earned a win?] Yeah, I said it after the game, I thought we played really well.

Sutter, on whether it’s more difficult for defensemen to join a new team than forwards:
I think overall in a general sense it would be tougher – it’s not the system. Defending’s a lot harder than the other way. But I think everybody gets too much made of it here because a lot was talked about Christian and the adjustment, well, either you can or you can’t. It ain’t about X and O. A lot of it’s about compete, so it doesn’t matter where you play. The league is still about the best competitors. It’s not specific or special for us or who our opponent is or the position or anything. Luke’s walked in and just stepped right in. It’s not an issue for him. We’ve seen that with lots of guys that we’ve brought. Every year we’ve had to bring defensemen in. The year we went to the conference finals, I think we played nine or 10 defensemen that year. The only year that we didn’t was when Jack got traded, and then we used the same defense for the rest of the year. The same defense for every game. But if you look at it since then, we’ve used lots of guys. I think the adjustment’s way blown out of proportion. The adjustment is just playing on a good team. [Reporter: His game fits, though, I mean he’s got the physical style.] I think he fits our defense because of the mobility of Marty and Muzz and Drew, and probably him and Brady are a lot alike. [Reporter: Overall, how has he done in the games he’s been in so far?] I think he was a difference-maker in two of the games, for sure. He’s made really good plays to score goals, not get noticed, get pucks back, knock guys on their asses to get pucks back. Last night, say what you want, that was a big difference in the game, the fights that Brady and him had with their two big forwards. Big difference in the games.

On several Kings not having played playoff games yet:
They haven’t. It’s true. [Reporter: Would last night, that third period, be as close to a playoff game?] I think everybody’s playing playoff games now, so if you don’t do it for three or four shifts, then it looks [that way]. So, when we lost to Ottawa, the question was, ‘Well, that’s not typical of the Los Angeles Kings.’ Well, you don’t win 82 in a row, and quite honest I know lots of guys who are asking those questions that wouldn’t have a clue about a playoff game or winning or losing. It’s the same old. It’s not some new recipe to win. If you score three goals, it should be enough to win hockey games, and it doesn’t matter if you score in the last minute or the first minute, or if you have a two-goal lead or the other team has a two-goal lead. It doesn’t matter. It’s the way it is. The teams are too close. If what everybody said is correct, just based on our division, Anaheim was the runaway winner to win the Stanley Cup this year. Not just win the division, win the Stanley Cup. So it’s way too close to call that.