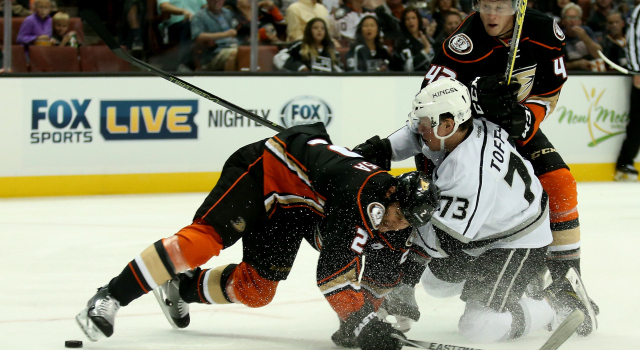 In the teams’ 44th game of the season, the Los Angeles Kings and Anaheim Ducks will finally share the same ice.

It’s the 14th divisional game for both teams, and while the Kings have alternated wins and losses over the six games since the flip of the calendar, the Ducks, who trail their division-leading rivals by 12 points with four games remaining in the head-to-head series, are 7-2-1 in their last 10 games and 4-2-0 thus far in their season-long, eight-game home stand.

Those numbers are mostly irrelevant because this is a rivalry game in which a team’s emotional quotient heavily impacts the outcome.

“I think just in general, the game is more about emotion than anything else, and if you don’t have that, then the X’s and O’s don’t really make a difference,” Dustin Brown said. “We went over them briefly this morning just to refresh, and again, to win in this league, you have to have emotion.”

Brown, as well as others, indicated that following a third period in which Los Angeles had potted a third period insurance goal before ceding four unanswered markers in a 5-3 home loss to Ottawa, that the team is able to quickly reset and face a divisional rival is more ideal than having to stew over a disappointing loss.

“It’s good, obviously, to get past it,” Dwight King said. “Like any loss, you learn from it. It’s obviously a different style of game, but I think everybody’s excited. Obviously it’s the first time, so it’ll be a good match-up for us.”

Darryl Sutter kept his response to a question about today’s game close to the vest during Saturday’s post-game press conference. Neither team tipped its hand significantly towards lineup changes, so whether Jonathan Quick will start for the second consecutive day, or whether the Kings plan on making personnel adjustments will not be revealed until warm-ups.

Dustin Brown, on facing Anaheim for the first time this season:
We all know they have a good team over there. It’s kind of weird to be playing ‘em for the first time this late in the season. You’ve got to be ready for what they bring. We know them well enough from years past. They’ve had a little bit of changeover, but I think their style of play has not changed. They have a few really key players on their team that are difference makers, so we have to key in on them.

Brown, on facing a rival so quickly after a disappointing loss:
Yeah, I think that’s what’s great about our schedule. Everyone likes to complain about it, but quite honestly, it gives us opportunities to get right back at it after a game like we had against Ottawa. It just happened to be the first game against the Ducks. Those games are always intense.

Trevor Lewis, on the rivalry with Anaheim:
I mean, we’re close to home, too. It’s a short drive here, but it’s a big game, and they’ve got a great team. They’ve had a little bit of changeover, but I think their top players and their systems are still the same and they play a hard game. I think we’ve just got to come out and match their intensity or exceed it and get it going right away.

Lewis, on facing a rival so quickly after a disappointing loss:
I think it’s nice to play again right away. You don’t have to thin kabout it too long. We know we can be better and everyone knows we can be better. We’ve just got to come out and make sure we’re focused and ready to go.

Luke Schenn, on his first Kings-Ducks game:
I’m real excited, obviously. I’ve never been a part of this rivalry, like you said. A few in the past – with Toronto, a big one is Montreal, and probably in Philly, the big one is Pittsburgh – so this is going to be real exciting. You look forward to these divisional games, and two big strong teams going at it, and talking to a couple of a guys, they said probably half the crowd is Kings fans as well, so it’s going to be a great atmosphere, and I’m really looking forward to it.

Schenn, on 16 divisional games remaining:
Yeah, we do have a lot of divisional games coming up, and those are key points that you need. You don’t want to look too far ahead, obviously. It’s another big one tonight, and there’s still half the season to go here, so we can’t get ahead of ourselves. These are crucial points and points you definitely need within your division.

Dwight King, on knowing what to expect from Anaheim despite roster turnover:
Yeah, their coach and top players are the same, so I don’t think their philosophy changes at all. They have a little bit of [new] personnel … but like anybody else going to a new team, they buy in and they play the same way, so it’ll be a nice test for us. 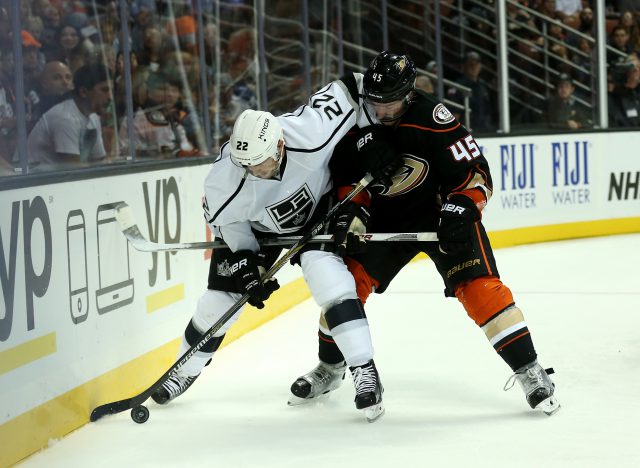