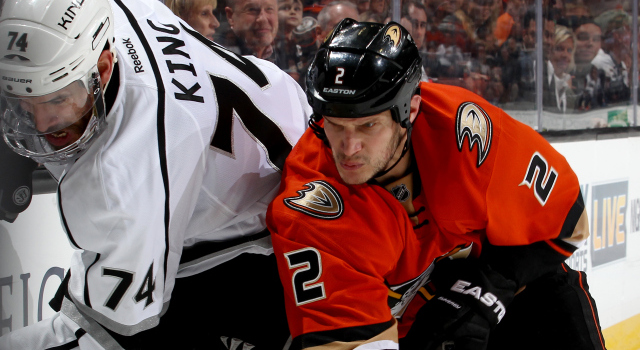 On the 3-2 win:
I thought we played a really good game. I think that the third period, I think [Perron’s] goal, Muzz made a good play to get it out and it hit the referee and the puck stayed in. I don’t think Jonathan saw it at all, so it was just a chip at the net and the puck got in. Other than that, it’s like a playoff game.

On whether Anze Kopitar’s line established a good rhythm in the second period:
I don’t think you wait until the second period to get rhythm. I think they were really good the whole night. I think in particular those three centermen – Jeff and Kopi and Lecavalier – were all really strong for us.

On Vincent Lecavalier:
It’s a big goal, it’s a power play goal. It’s two teams that don’t give up many scoring chances. Tonight, what were there, three or four penalties each, and we scored a power play goal and they didn’t, and in the end it has a big impact on the game.

On whether the performance was tighter than Saturday’s game:
We played a really good two periods yesterday. Everybody’s playing playoff hockey now. If you want to make the playoffs, it’s the same thing. We’re trying to make the playoffs. A little bit too much talk around our team the last couple weeks about new players and contracts and all that. You know what? We’re trying to make the playoffs. We were playing tonight a team that won the division last year and went to the conference finals, so to think that you’re going to have momentum the whole game or anything like that, it’s not. We have a lot of guys in here that still have a lot to learn about being a playoff player. In fact, we have a lot of guys that haven’t played a playoff game. It’s a fact. I mean, the big thing last night was Kopi’s contract. Well, how many times has the media asked Kopi, and he said the contract will get done when the same numbers that all the geniuses were reporting are what he signed for. One of the biggest problems last night with our game was he had to get interviewed before he came off the ice about his new contract between periods. So, how much did that impact the game? Maybe that’s why we lost the game. Breaking news. Got to get to it first. Hard to believe, right? What do they call that? Echo journalism? Drives me nuts.