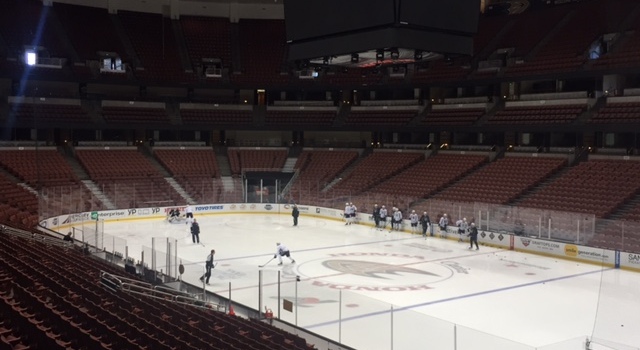 Good afternoon from Orange, California. The Kings and Ducks will go to battle against each other for the first time this season on the far banks of the scenic Santa Ana.

-There were no hints towards the lineup that will be used tonight (6:00 p.m. / FOX Sports West / KABC 790 / I Heart Radio). Today’s skate was optional, so there were no line rushes. Jhonas Enroth was the only goalie on the ice, so the #LAKingsGoalieTweetOff was null and void. There could be a lineup change or two considering the events of yesterday’s third period, but if changes do indeed happen, there were no firm indications this morning. Today’s game preview will project Jonathan Quick as the starter, but that’s just an educated guess. Ditto for the Ducks, who haven’t announced their starter, either.

-If a puck drops at Katella and Douglass and no media is there to see it, does it really make a noise? Sunday’s game is the first between the Southern California rivals this season, and no media, other than in-house types and FOX Sports West producers, was present to cover the morning skate. That’s more of an editor’s decision than any personal choices of individual reporters, but this may have been the first time in five years of covering the team in which no other reporters were present at a pre-game skate, and of all times, it was prior to the first Kings-Ducks game in 10 months.

-More to come shortly, including several players’ takes on the first Freeway Faceoff installment of the season. A reminder: There’s a special one-hour pre-game show, which, in addition to the intermissions and post-game show will be simulcast on FOX Sports West and Prime Ticket. During in-game action, Bob Miller and Jim Fox will provide the call on FSW, while John Ahlers and Brian Hayward will call the game on PT. Pre-game, intermission and post-game TV coverage will be provided by both team’s broadcasting crews, which in addition to the names above includes Patrick O’Neal, Sean O’Donnell, Kent French, Guy Hebert, George Parros and Julie Stewart-Binks.

-How about those broad panes of glass covering the width of the ice in Anaheim? Have we seen the last of the Arbitrary Honda Center Stanchion Bounce? 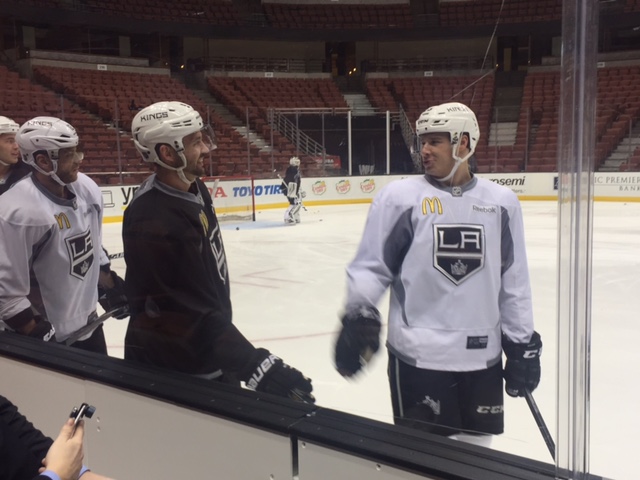