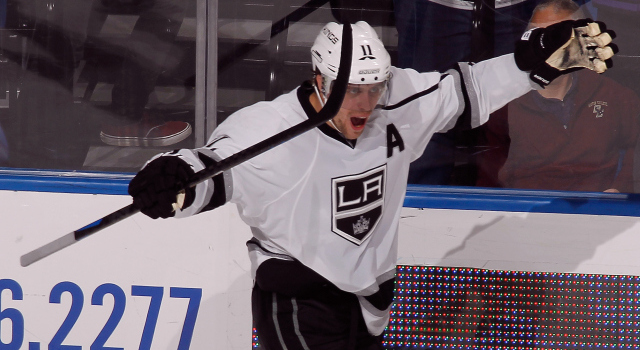 As first reported by LA Kings Insider, Anze Kopitar has finalized his eight-year contract extension with the Kings. According to this report from Darren Dreger and supporting an earlier report by Bob McKenzie, it is a front-loaded eight-year, $80-million contract. According to Pierre LeBrun, the extension includes a $9-million bonus payment on July 1 and another $9-million bonus in the summer of 2017.

Kopitar deal as announced by LA has NMC first four years and some NTC protection in last four years.

According to financial information provided by General Fanager, Los Angeles now has $61.2-million invested in 16 players next season, should Vincent Lecavalier retire. Brayden McNabb is due to become a restricted free agent, while Milan Lucic, Luke Schenn, Trevor Lewis, Christian Ehrhoff, Jhonas Enroth and Jamie McBain will become unrestricted free agents if not signed by July 1.

Like Jeff Carter, Kopitar is now signed through the 2021-22 season. He joins Carter, Jonathan Quick, Dustin Brown, Drew Doughty, Marian Gaborik, Jake Muzzin, Alec Martinez and Kyle Clifford as Kings signed through at least 2020. Not all of those contracts represent the most pristine value for the club, however, and based on conversations with those in team management it has become clear that if the team intends to sign Milan Lucic to a contract extension that at least one current sizable contract will have to be moved.

While this is a massive contract that could potentially complicate the team’s financial flexibility next decade, it’s also a signing that is absolutely vital to the team’s ongoing success. Put bluntly, without Kopitar, the Kings aren’t necessarily an elite NHL team, and while a $10M cap hit is very high, it’s still clearly the preferred scenario over seeing a franchise player test free agency.